On Wednesday, January 26, MERICS held the third edition of the China Forecast. 850 respondents answered 15 questions, nine of which focused on the development of EU-China relations. During the event two panels of experts further explored the topic of China in 2022, as well as EU-China relations in the coming year. The overall tone offered  little cause for optimism. What emerged is that there are many reasons for concern in China’s domestic and foreign policy. As the space for competition and rivalry is growing, some areas for collaboration are still available. We have selected some key quotes from the speakers.

“Liberal democracies are now beginning to pay a lot more attention to the whole question of interference of the United Front which Xi Jinping is reinforcing in China. I think that 2022 and the next years will see a lot more of that. In the words of Robert Frost, the American Poet: “Good fences make good neighbors.” China of course doesn´t like us to have fences, even if they have them, but I am afraid that that is going to be a trend of the time.”

“Beijing is aware that there is a changing perception of China in Europe that is quite broad. That does worry them. Certainly, the change in German government, the French presidency and also the elections there are getting a lot of attention by China. They would ideally like to stabilize relations with Europe after what has been quite a turbulent year in 2021.”

“At this stage I worry about the supply chain getting hit by omicron and China getting into a real spiral of problems. The [new supply chain] law is coming next year, I wouldn´t say I´d wait until next year to worry, but it´s definitely going to make it more difficult in particular for SMEs to do the kind of checkup that´s required. About Xinjiang, no auditor is willing to go anywhere close to there. Controlling the supply chains is very complicated, and there has to be some leniency, to grant companies to audit within their own factory gates, to audit their supplier, to find commitment letters from the customers. But all the way down to the last shirt, shoe or carpet, you simply have no way to find out.”

“I would reiterate climate as an area for collaboration because I have a lot of respect for China's current energy transition policies as opposed to two or three years ago when it was only pretending. China is a very serious partner in many of these alternative energy sources. I would see two more areas suited for collaboration. One is financial criteria for international aid because China hasn't proven very good at this as the BRI story shows, and China is a creditor country which has problems of repayment. The second area that I would still name is biosecurity. In spite of the awful situation regarding the inquiry on the origins of Covid-19, resolving the resulting pandemic seems to be a shared interest where China would probably want to cooperate.”

“I think that the transatlantic component of US policy in approaching China and security in the Indo-Pacific region will be increasingly important going forward, and the Trade and Technology Council with its 10 working groups will play an important role. 2022 is a very crucial year for what we can do in the transatlantic space. One of the issues that's being looked at is honing some export controls in dealing with China and looking at outbound investment screening.”

“China’s efforts to woo the rest of world will continue. And I don´t think the larger countries in the world should be under the impression that there is a universal concern or fear about China. In fact, in much of the world China does provide technology, equipment and capital, which in a sense liberates those countries from Western conditionalities on the same things, capital, technology and equipment.”

“China is facing enormous problems domestically: the very difficult covid situation, the economic situation, inequality and climate change. We know that a lot of China’s international relations are driven by its domestic concerns. One of the big questions really is to what extent China is going to be so focused on its domestic problems so that it will be somewhat distracted from problematic international engagement, like Taiwan; or whether escalating international disagreements will provide a welcome distraction from problems at home for leaders, as they so often have elsewhere in the world.”

In case you missed the live event, the recording is now available for you to watch: MERICS China Forecast 2022 | YouTube

Following Lithuania, Slovenia is now the second EU member state to have been hit by Beijing’s unannounced trade sanctions. Both European countries have fallen foul of Beijing’s one China principle and its intransigence over all matters relating to Taiwan. To understand China’s increasing use of coercive measures, we look at how the Beijing-Vilnius spat is being assessed by Chinese analysts. 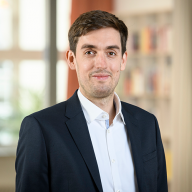 Although European officials have only recently begun to allude to Washington’s potential role in helping foment the Beijing-Vilnius row, the Chinese have shown no such caution. “Anyone with a discerning eye can see that the U.S. is behind the issue with Lithuania”, writes Ding Yifan, an academic at Beijing Foreign Studies University. In China, there is little doubt that Washington is exploiting Eastern Europe’s visceral fear of Russian aggression both to goad Beijing and to pressure the EU into taking a more assertive stance on Taiwan. Vilnius, for its part, is condemned by the Chinese for prioritizing its own security interests at the expense of both EU unity and Brussels’ relations with Beijing. 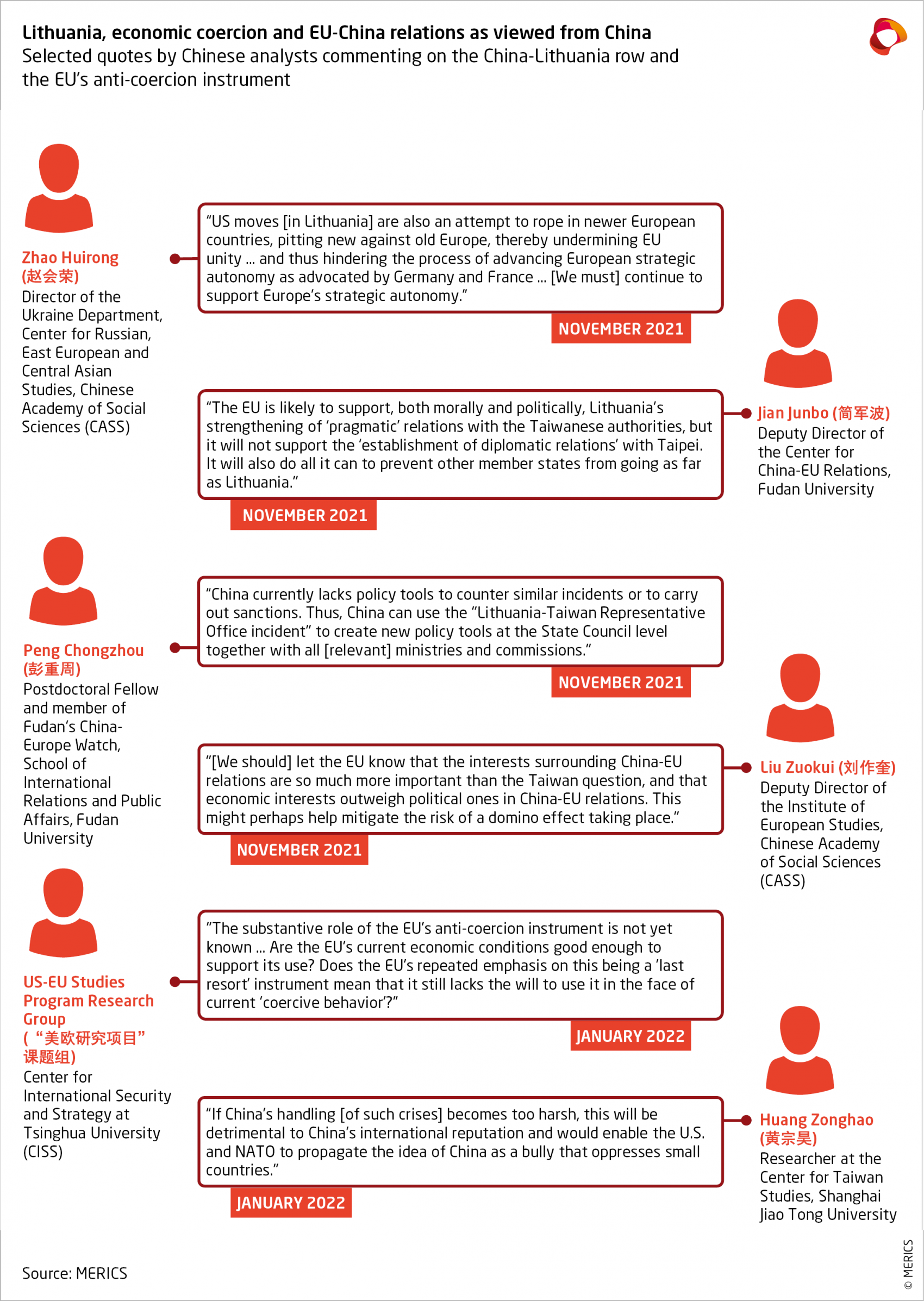 Making an example of Lithuania

But Chinese concerns go beyond this. With the US and Lithuania purportedly calling on other European countries to increase their overt support of Taipei, Chinese analysts regularly express their dread of a potential domino effect. Thus, if Lithuania’s behavior is not met with the sternest of response, it risks “setting an example” (产生示范效应) for others to follow, they fear. “The most important thing is not so much to hurt Lithuania directly, but to make our diplomatic red lines clear-cut by hitting back so as to stop countries with real regional and global influence from ‘playing with fire’”, writes Yao Xu from Fudan University. In November, he and his colleagues argued in favor of imposing economic sanctions on Lithuania rather than severing diplomatic ties—deemed too harmful to EU-China relations.

Throughout Beijing’s row with Vilnius, Chinese analysts have remained confident in the EU’s ability to strike the right balance between support of a member state and avoiding going too far in confronting Beijing. More surprisingly, perhaps, neither the EU’s recent WTO case against China nor its anti-coercion instrument seem to have overly perturbed them. The former is largely viewed as a measured (and perhaps even understandable) reaction to perceived threats to the EU’s internal market. As for the latter, “the proposal has been in the pipeline for some time and is by no means aimed [solely] at China … EU-US economic and trade friction has been the most important driver,” say Tsinghua researchers Sun Chenghao and Wang Yexu. Reading between the lines, this new instrument is considered good for the EU’s strategic autonomy and therefore not necessarily bad for China — not least because many doubt Brussels’ willingness to make use of it.

Towards a new sanctions law in China?

Finally, several analysts in China expect that crises such as those involving Lithuania and Slovenia will re-occur and therefore recommend formalizing Beijing’s recent use of political and economic sanctions into a new law. Jian Junbo, another academic from Fudan University, argues that such legislation “would have a deep and long-lasting deterrent effect on countries, groups and individuals who recklessly seek to undermine China's core interests with regards to Taiwan”. Were Beijing to heed such calls, this could augur the formalization of a Chinese equivalent to America’s secondary sanctions. A more obvious takeaway from these analyses, however, is that Taiwan remains the issue on which Beijing is unwilling, and perhaps can least afford, to compromise.

The respondents to a survey conducted by MERICS identified economic security as what should be the top focus of EU-China relations in 2022. The French Presidency has already placed important related items on its agenda, such as the anti-coercion instrument and the due-diligence mechanism. Whether economic security means defending the EU way of life remains up for debate. In a recent interview Sabine Weyand, Director General for DG Trade, offered an interesting new paradigm that embeds and goes beyond economic security, that of dual integration — “to combine several instruments aimed at revitalizing multilateralism, but also to develop autonomous instruments to defend our interests in the absence of cooperation from others”. 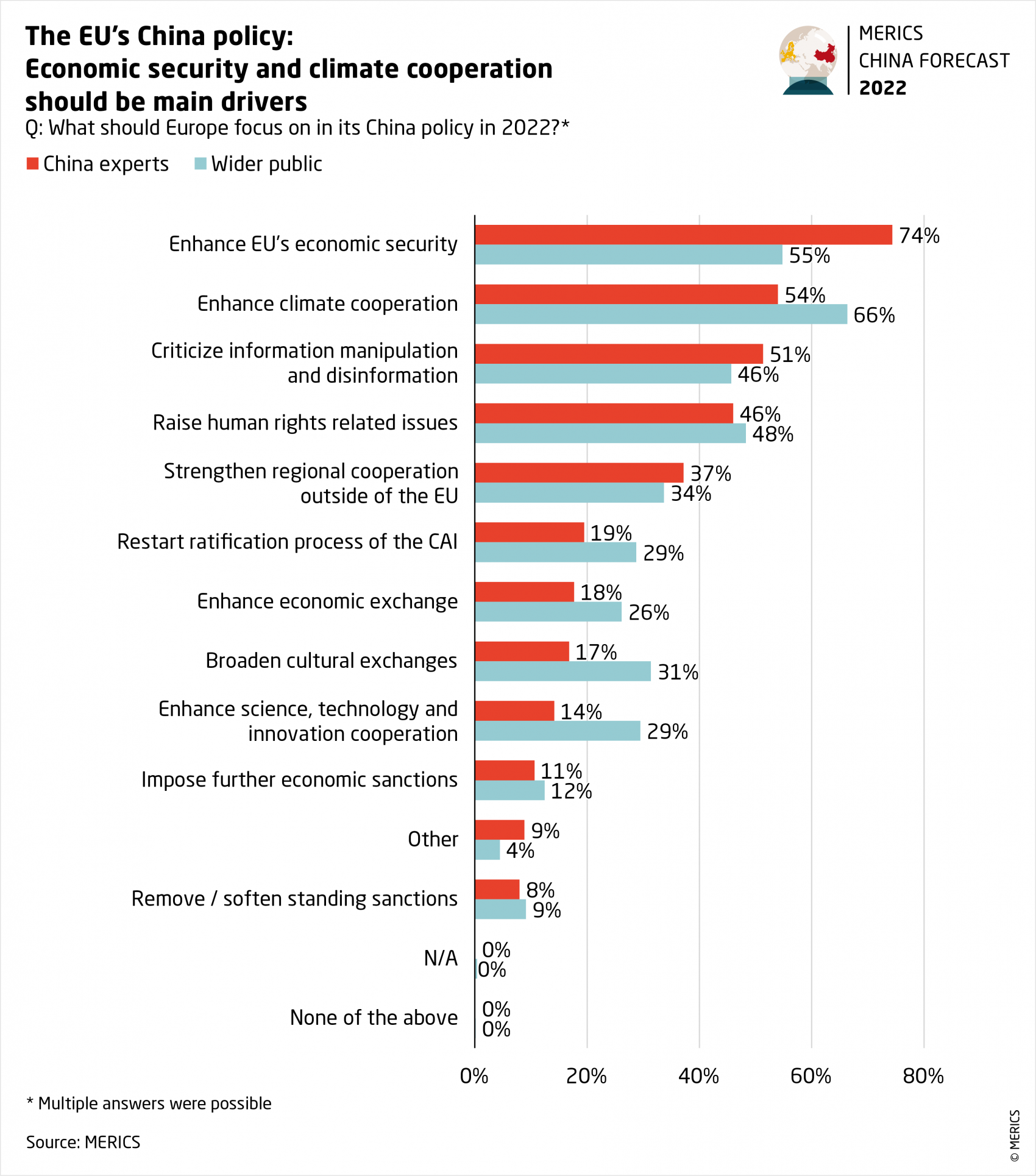 On January 27, the EU raised the Beijing-Vilnius dispute to a multilateral level by launching a complaint against China’s economic coercion with WTO. While the move is unlikely to change China’s behavior in the short-term, it can help to facilitate a more effective EU response down the line.

Quick take: The launch of the WTO case is an important gesture signifying EU solidarity with Lithuania. However, the dispute resolution process is likely to take years and may only have a limited impact on Beijing’s behavior. It is, therefore, paramount that the launch of the case does not hinder the current sense of urgency for a rapid introduction of a robust anti-coercion instrument. The instrument paired with measures cushioning Beijing’s economic coercion remains the EU’s best bet.

Still, the WTO process provides Brussels with a framework for building a legal case against China’s targeting of Vilnius and with a platform for similarly aggrieved parties to collectively oppose Beijing’s economic coercion practices by joining the WTO consultation process.

Forced labor ban and Due Diligence Mechanism: A two-pronged approach

On January 25, Sabine Weyand, Director General for DG Trade, presented a proposal for a forced labor ban to the European Parliament Trade Committee.

Quick take: A forced labor ban is overdue and luckily the debate within the EU seems to revolve around how it should look like rather than whether one is needed. However, since it is overdue, to include it in the incoming due-diligence legislation would allow the EU to kill two birds with one stone. It would make sure that the legislation progresses, and that the EU finally has a forced labor ban. Proposing an ad-hoc forced labor ban from scratch would add to the already numerous instruments and regulations in the pipeline and it appears to be a less efficient solution that would drag on the issue.

The EU released an outline of a more assertive action plan for boosting its position on setting international standards for high-tech and green-tech products. The move is seen as counter to China’s growing position in this space.

The French Presidency released a list of 30 foreign affairs ministers invited to take part in an EU-Indo-Pacific forum planned in Brussels on February 22. China is not among the invited countries.

The EU and the US are planning to conduct two Trade and Technology Council meetings this spring – one virtual and one in person, expected to take place in Europe in May.

According to data from Rhodium Group and Baker McKenzie, Chinese foreign direct investments in Europe increased by 25 percent in 2021 reaching USD 12.8 billion but investments in high-tech continued to shrink over increased scrutiny.

Richard O’Halloran, an Irish businessman who was denied the right to leave China for close to three years over an aircraft leasing dispute, was allowed to return home and reunite with his family.

Huawei announced that it has initiated an arbitration process against Sweden under the World Bank Group’s International Centre for Settlement of Investment Disputes over ban of its 5G equipment.