China’s economy is stuck in low gear, with the ever-present risk of sharper slowdown. The government’s stern Covid-19 control measures continue to act as a drag on growth, despite the lifting of the harsh regional lockdowns that froze the city of Shanghai and several key manufacturing areas in April and May. There is no sign of a strong rebound coming soon and little reason for optimism amid never ending lockdowns holding back domestic demand and the worsening global economic outlook. The official growth target of “around 5.5 percent” now looks out of reach as the government scrambles to stabilize the economy. As the political elite make final preparations for 20th Party Congress at which President Xi Jinping expects to claim a third term in power, slow growth and pessimistic sentiment will be a real stress test for the economy.

GDP expanded by 0.4 percent in the second quarter, and 2.5 in the first half of the year. Current developments are hitting China’s aspiring middle class hard: securing a good job with a high salary has become secondary to getting a job at all. This summer, a record number of new university graduates will enter one of the worst job markets ever.

The real estate sector captures a lot of the problems currently in the economy. Construction, land and apartment sales are all down significantly. Falling sales adds to cashflow problems of indebted real estate developers and diminishes tax revenue of local governments. Falling building sales reflects weak sentiment of the middle class. Falling prices are eroding wealth and punishing buyers who bought at a higher price but are waiting for construction to be completed.
In May, the government began a rapid roll out of new stimulus measures. The State Council announced 33 measures, heavily focused on fiscal and monetary support for investment and consumption. This is a step-change from the cautious stimulus that began in late 2021 and tried to support growth without flooding the economy with cheap money and fueling inflation. The May measures include tax relief worth RMB 1.6 trillion and RMB 3.5 trillion in special purpose bonds. July saw another RMB 300 billion earmarked for special bonds for infrastructure projects and a fresh round of employment programs.

In short, the government appears to be reverting to a familiar policy toolbox. Unfortunately, the economy is now less responsive to stimulus measures focused on infrastructure and investment than it was during the global economic crisis of 2008. Nor do these measures address the corrosive risks posed by middle class disenchantment. University graduates who have suffered China’s intensely competitive exam system for the prize of white-collar work will not want construction jobs or factory work. Their job prospects have been dimmed by tight regulatory curbs that triggered layoffs in more desirable sectors, such as technology firms, finance and real estate.

The government might be able to stabilize the economy through more stimulus, but it will be at the expense of efforts to de-risk the financial sector and boost productivity growth. The biggest lift the government could give to growth would be to phase out ultra-stringent Covid control measures and fully reopen the economy. That seems to be unlikely to happen before sometime in 2023, at best.

What to watch: Debt is likely to surge even higher as more stimulus measures are introduced.

What to watch: Business sentiment picked up in June, but new Covid-outbreaks and subsequent lockdowns could easily lead to another downturn.

International trade and investment: Exports continue to give the economy a crucial lifeline – for now 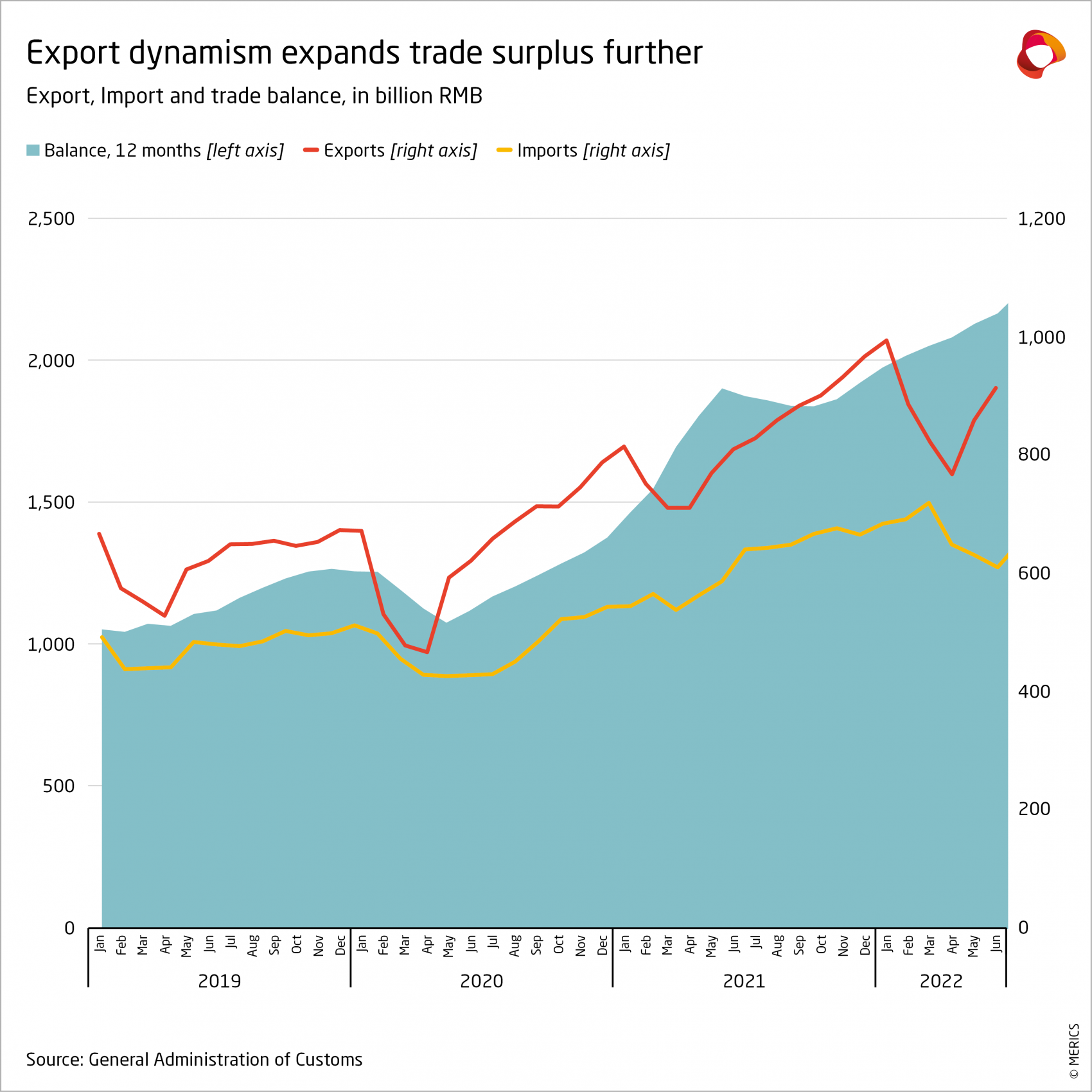 What to watch: We have said it countless times already: The era of exports as China’s major growth driver is coming to an end.

Financial markets: PBOC is in a dilemma on how to support the economy and preserve financial stability 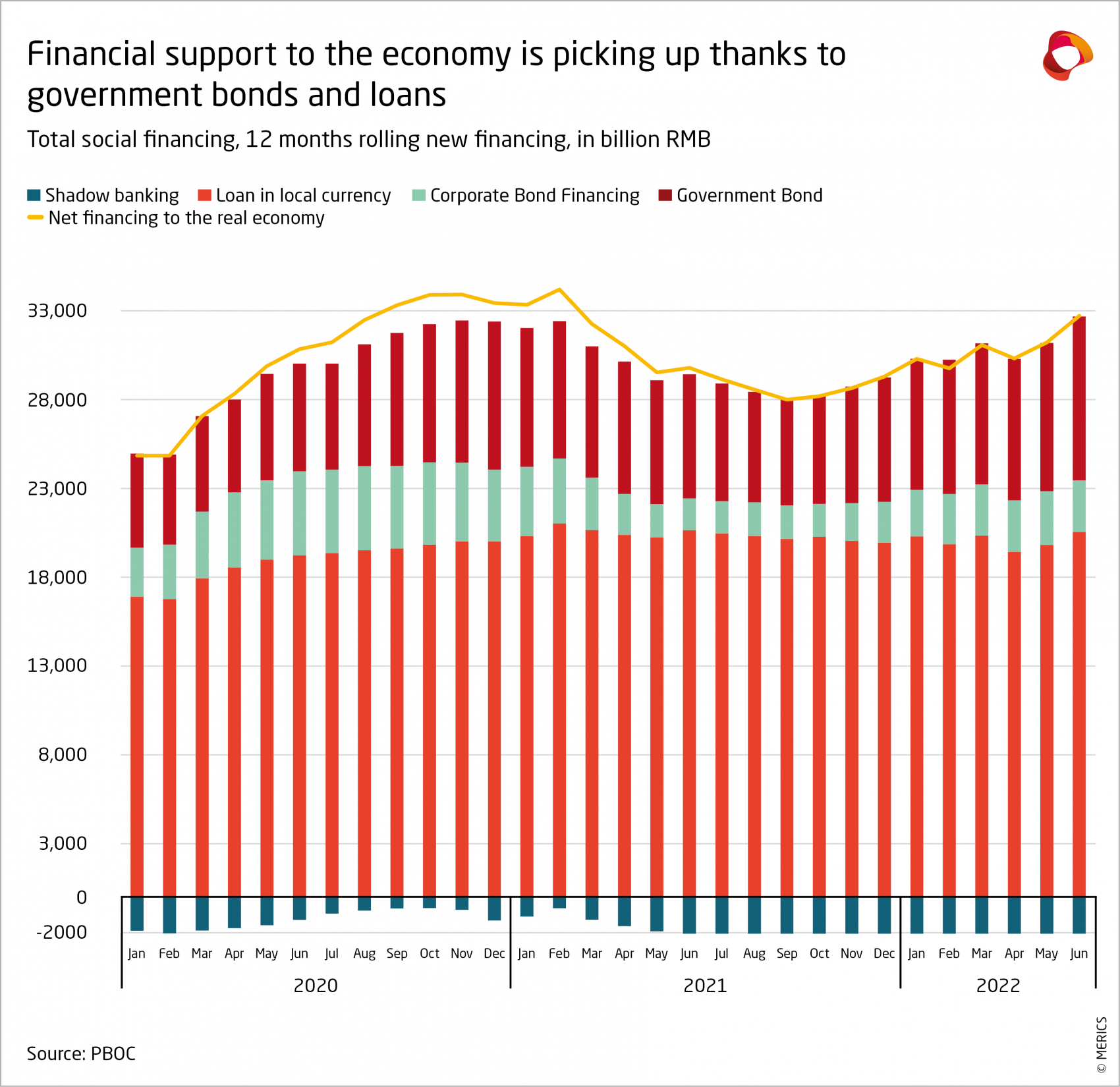 What to watch: More small and medium sized banks could come under pressure, as in Henan, exposing systemic risks in China’s banking system if the economy does not pick up.

What to watch: Infrastructure investment and investment by state-owned enterprises are likely to accelerate in the coming months as the stimulus broadens.

Prices: Inflationary pressure in China is well below the rest of the world

What to watch: PPI is likely to pick up as the government rolls out more stimulus, while weak consumer demand is likely to persist and keep CPI increases moderate.

What to watch: Without a clear exit path from the current ‘zero-Covid’ strategy, consumption and services will not improve.