Educated and wealthy urban Chinese have an overwhelmingly positive view of commercial and government-run systems that rate the “trustworthiness” of citizens, businesses and social organizations. Rather than perceiving them as instruments of surveillance, they see them as a way to protect consumers from food scandals or financial fraud – and to access benefits connected to a high social credit score.

China’s plan to introduce a nation-wide Social Credit System (SCS) by 2020 has been widely debated. Media headlines suggest that the dystopian future portrayed in an episode of Netflix series Black Mirror, Nosedive, is becoming a reality in China as commercial companies and local governments introduce rating systems that rank Chinese citizens, businesses and social organizations. Currently, there are more than 40 local government-run SCS pilot programs and numerous commercial pilots set up by technology firms such as Ant Financial (Alibaba) and Tencent. What the different fragmented initiatives have in common is their aim to steer citizens and organizations towards “trustworthy” or “honest” behavior.

Previous research focused mainly on the implementation and local experiments and analyzed the systems as a big data-enabled approach to market regulation and as part of the CCP’s broader strategy of social management and social control. China Law Translate (Jeremy Daum) and China Copyright and Media (Rogier Creemers) have provided insightful analyses on the legal framework of the system. Yet, so far there has been little research into the public acceptance of these social credit rating systems. The small but growing number of studies investigating citizens’ attitudes towards social credit systems include qualitative interviews on Sesame Credit users’ ​consumer protection concerns and an analysis on official media discussions and social media posts.

Our recent study on public opinion about China’s emerging social credit systems sheds light on how approval of social credit systems varies among different citizen groups. The study was conducted among 2209 Chinese citizens from February to April 2018 and is representative for the internet-connected population in China aged 14-65 (based on age, gender and region). Additionally, we conducted 15 semi-structured interviews with Chinese citizens to gain additional insights. 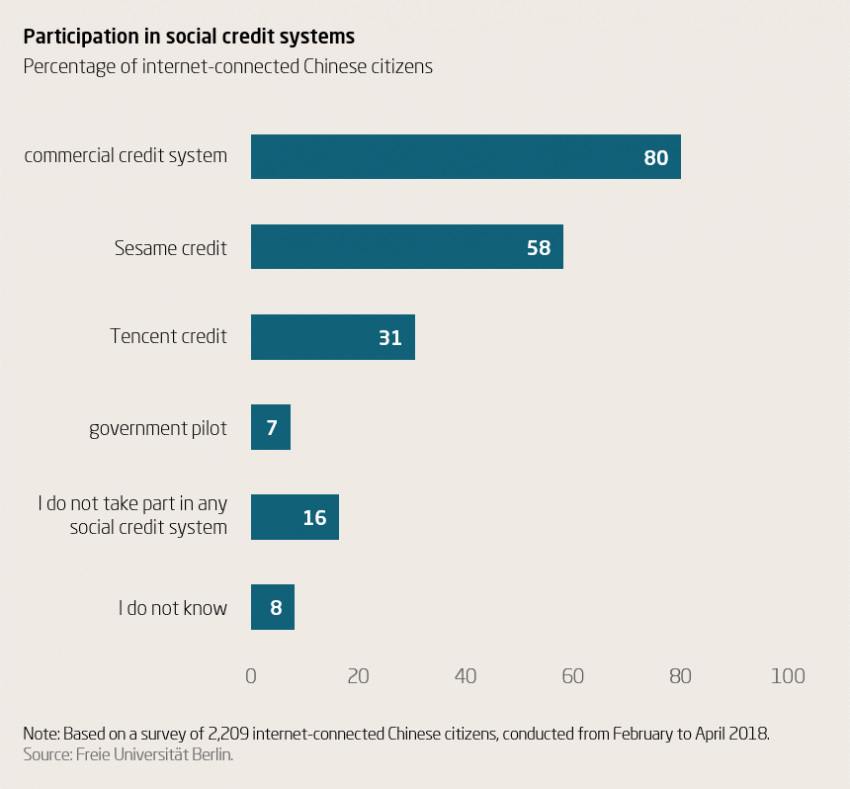 To some extent the high degree of approval we found might reflect the nature of conducting a survey in an authoritarian setting. Yet, half of respondents indicated strong approval, suggesting that overall public support is quite strong. The additional interviews we conducted further confirmed these high approval levels. However, the significant number of value-neutral respondents (neither approve nor disapprove) might suggest the existence of a group of “doubters” – one in five Chinese – who remain unconvinced and more critical.

Interestingly, socially advantaged citizens – wealthier, better-educated and urban residents – show the strongest approval of social credit systems, along with older people. At first glance, it seems counterintuitive that these respondent groups would support systems that potentially influence their economic, political, and social freedom and opportunities. As current research by Jennifer Pan and Yiqing Xu suggests that in China the young, better-educated, coastal urban residents lean toward liberal views, there is an expectation that liberals would be more skeptical of social credit systems. 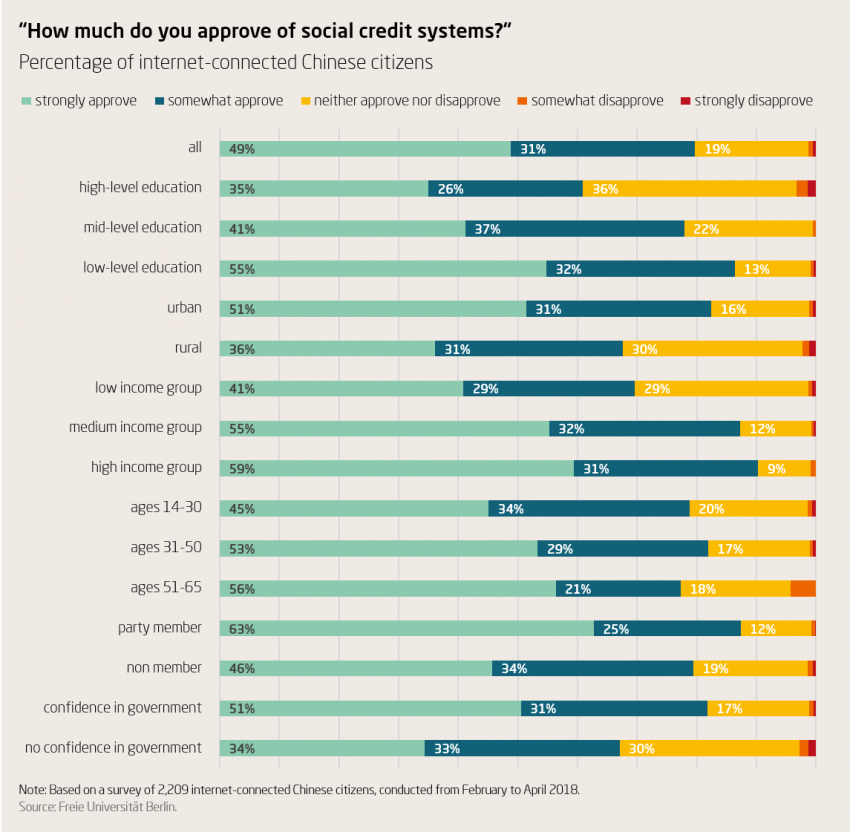 One explanation could simply be that wealthier and better-educated urban respondents are more technology-savvy and interpret social credit systems as a technological advancement. However, in our recent study we propose a different interpretation. Higher educated and wealthier citizens, particularly in urban areas, have access to a wider range of benefits offered via social credit systems, such as deposit-free sharing economy services, fast-tracked check-ins for hotels, and mobile payment options. Social credit systems are viewed through a particularly positive lens by respondents with access to these benefits that contribute to a convenient and attractive lifestyle.

The survey results further show that wealthier, higher educated, urban respondents perceive social credit systems as an instrument to close institutional and regulatory gaps, leading to more honest and law-abiding behavior in society, and less as an instrument of surveillance. In line with this, interviewees were also conceivably less concerned that social credit systems provide data for purposes of social control since many assume that the Chinese security apparatus is able to access any such information already.

One such institutional gap as identified by respondents is China’s underdeveloped financial credit rating system, which has made it difficult for households to access credit. Commercial social credit systems such as Sesame Credit are seen as valuable as they offer banking services with attractive interest rates for loans and savings accounts for users with high scores.

In addition, social credit systems are seen to address regulatory enforcement issues ranging from food safety and non-compliance with environmental regulations to a growing number of internet scams. For instance, in a context of frequent food safety scandals, local government pilots such as Honest Shanghai offer users additional information to check whether restaurants are “trustworthy” and abide by food safety regulations. For example, 72 percent of survey respondents stated that their purchasing decisions were influenced by the social credit assessment of the company offering the products or services. Hence, social credit systems are seen as a helpful means to making things work and improving quality of life.

System’s future success will depend on transparency and fairness

The findings show that for many citizens, the assumption that private company pilots use fair and transparent methods to create social credit scores is a significant predictor of approval for social credit systems. Yet currently, the algorithms used to calculate individual scores are not known. As the SCS systems are advancing, more transparency in how the scores are calculated and weighted will be crucial for public support. Fairness will be the other major issue. In interviews, respondents expressed concerns over what they perceived as unfair scoring methods, with some worrying that the same standards might not apply to “people in powerful positions.” One interviewee pointed out the difficulties in repairing a low credit score after an extended period of sickness or personal (financial) difficulties.

Future developments of the pilot projects and of the joint enforcement of rewards and punishment will impact how the systems are perceived in the future. As the social credit system advances, consequences will become more far-reaching. Once citizens find that they are unable to understand how assessments of (un)trustworthiness are made or experience unfairness, it is unlikely that approval remains as high as observed in this survey.

The views expressed in this article represent the views of the author and not necessarily those of the Mercator Institute for China Studies.

How Beijing could make progress with its common prosperity agenda, with Bert Hofmann and Mikko Huotari