Turmoil in the important real estate sector is only one of a number of convulsions putting pressure on China’s economy – and on Xi Jinping in the year he hopes to get himself confirmed as head of the Chinese Communist Party for a remarkable third time. Shortly after its stocks were halted from trading, China’s property giant Evergrande on March 22 joined several other developers in announcing an indefinite delay of the publication of its audited annual report originally scheduled for the end of the month. In response, several Chinese banks seized 2.1 billion USD of Evergrande’s bank deposits as collateral  for “third-party guarantees”. With bond payments totaling almost four billion USD due within the next three weeks, the troubled developer is edging ever closer to insolvency.

Chinese business confidence – a proxy for companies’ willingness to invest – has been sapped on many fronts. Russia’s invasion of Ukraine and ensuing US and EU sanctions against Russia have seen Chinese firms struggle under secondary sanctions. Several omicron clusters in China’s worst coronavirus outbreak to date have disrupted supply chains and consumer demand in affected cities.

This combination pummeled China’s financial markets. After the CSI300 stock-market index fell by 14 percent in the first half of March, Beijing intervened. In a meeting of the State Council’s Financial Stability and Development Committee, vice-premier and economic czar Liu He announced Beijing would implement new policies to boost China’s economy and support enterprises in their overseas-listing endeavors. While the index quickly bounced back five percent, it remains eight percent below the start of the month.

Beijing’s intervention suggests that the party-state is reconsidering its current strategy. The 2021 regulatory firestorm – which hit the real estate and tech industries and ended the private tutoring sector – suggested Beijing was increasingly comfortable paying significant economic costs to advance political goals. It may still not be hitting the brakes, but the economic price of achieving those goals may now be seen as so high that Beijing is at least taking its foot off the gas to meet growth targets and maintain stability.

MERICS analysis: “Xi Jinping has had a bad start to the Year of the Tiger. In a time that is meant to provide a smooth lead up to his bid to remain in power, China’s economy has been hit with a barrage of challenges,” says Jacob Gunter, MERICS Senior Analyst. “In an attempt to keep the economy and society stable in the lead up to November’s Chinese Communist Party Congress, we can expect longer-term goals like the deleveraging of debt and decarbonization of the economy to be kicked down the road. Instead, the focus will be on stimulating growth and keeping the economy from hitting any rocks.”

GRAPHIC OF THE WEEK

The “two sessions”, the National People's Congress (NPC) and the National Committee of the Chinese People's Political Consultative Conference (CPPCC), wrapped up in Beijing on March 11. Here is an overview of the main outcomes: 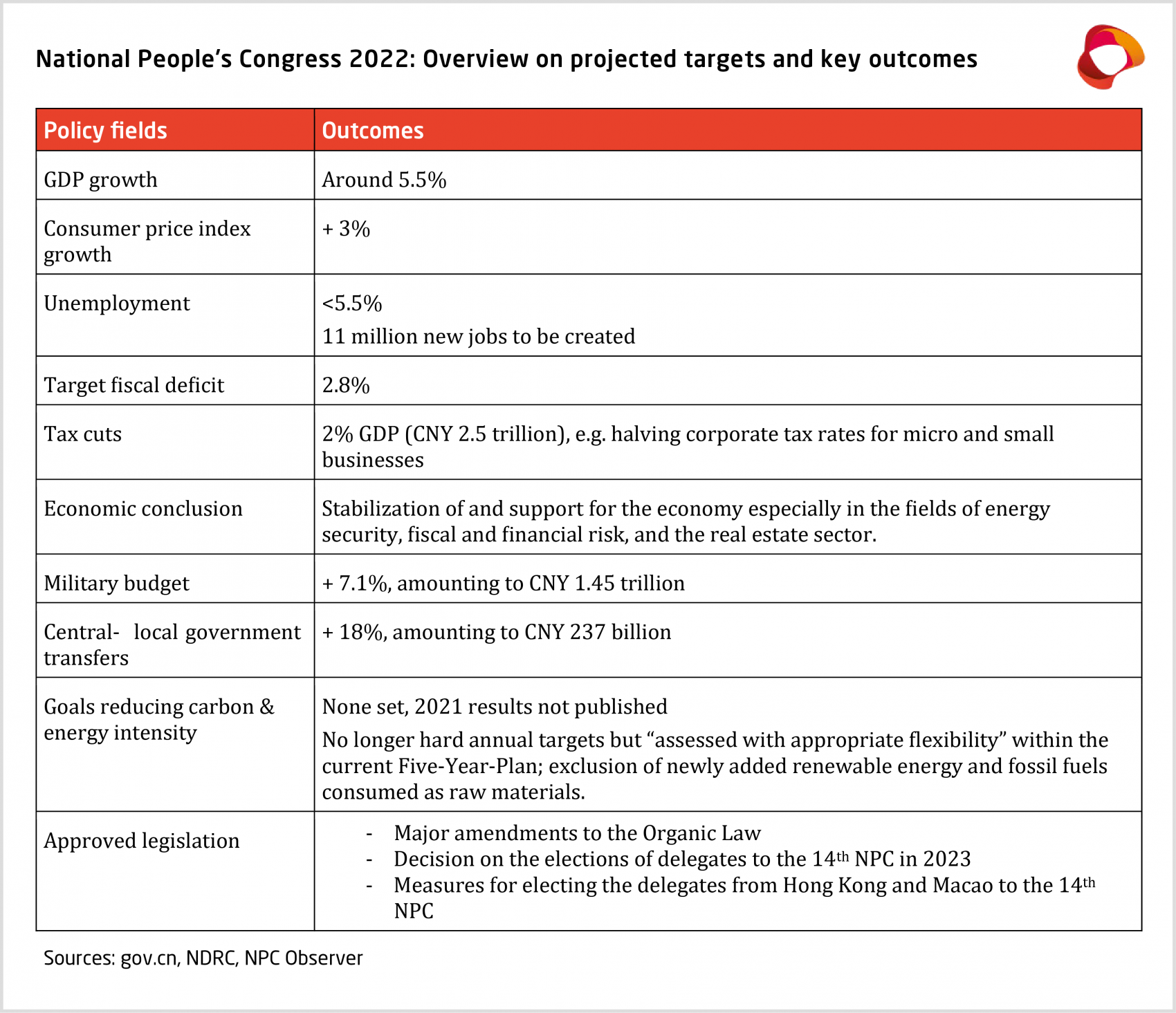 The number of user accounts deleted from Chinese online platforms in 2021. The Cyberspace Administration of China (CAC) on March 17 revealed the results of its most recent „clear and bright” (清朗) campaign to clean up a “chaotic cyberspace” and build a “civilized internet”. It also deleted 22 million posts, banned 7200 video streamers and shut down 3200 websites. The campaign included eight tasks, such as the silencing of “historic nihilism”, addressing online fraud and the excessive use of pop-up windows. The CAC plans to further broaden the scope of the campaign in 2022, taking aim at recommendation algorithms and multi-channel networks. (Source: People’s Daily [CN])

The facts: The call between Joe Biden and Xi Jinping on March 18 underscored the rift between the two global powers’ positions on Russia’s invasion of Ukraine. While praising China’s role as constructive, Xi criticized the imposition of “sweeping and indiscriminate sanctions” and repeated criticism of NATO’s role in triggering this crisis, calling for the US to “reject the Cold War mentality and refrain from bloc confrontation”. All this came in the face of Biden’s warnings of consequences if China were to provide material support to Russia, after media reports claimed that Moscow had approached Beijing with requests for military assistance.

Xi’s calls for a negotiated solution to the conflict also failed to mention the EU. Xi simply called for NATO and the US to start a dialogue with Russia to address the “crux” of the issue. This should come as a note of attention to European actors: Beijing does not consider Europe to be a central actor in the conflict.

What to watch: The April 1 EU-China Summit will provide one more opportunity for Europe and China to get on the same page with regards to Russia’s invasion of Ukraine. But China’s official position suggests that a positive outcome will not be forthcoming. Europe should expect Beijing to continue placing domestic imperatives over concerns over damages to its reputation or its relations with the West.

MERICS analysis: “Beijing is looking at this crisis through the prism of its own interests and geopolitical competition. By blaming the US for instigating the war, China is trying to present itself as the opposite: a responsible power that seeks peace, rather than war. This narrative stands in contrast to Beijing’s unwillingness to condemn Russia’s actions.” Helena Legarda, Lead Analyst at MERICS

Covid in China: Reaching the limits of dynamic zero

The facts: Up to 37 million are in lockdown again in China following a sharp increase in Covid-19 infections. With many taking to social media to express their frustration at testing and quarantine rules, it appears people’s patience with the country’s “dynamic zero-Covid” policy is reaching its limits. The outbreaks, in early March, affected several areas in major cities such as Shenzhen and Shanghai. Schools in Shanghai have reverted to online classes while, elsewhere, factories and businesses have been forced to halt operations for at least a week until mass testing is completed, and all positive cases have been detected and isolated. President Xi Jinping has told officials to persevere with the approach.

What to watch: Low vaccination rates especially amongst the elderly puts China at risk of further spikes and fatalities from the highly infectious Omicron variant. Half of the country’s seniors over 80 years old are unvaccinated, and only about one fifth have received the booster. Research has shown that China-made vaccines have been less effective than those made with mRNA technology in preventing deaths from Omicron infections. While new protein subunit vaccines and oral medication will be offered soon, mRNA vaccines are not available in mainland China. In Hong Kong, where demography and vaccination rates are comparable to the mainland, elderly patients accounted for half of the deaths in this latest wave. A hard lesson for Beijing, as Hong Kong documented one of the highest mortality rates worldwide.

MERICS analysis: "Some concessions are being made to public frustration, albeit hesitantly, to balance pandemic prevention with economic and social development. However, the current combination of insufficient immunization rates, the infectious Omicron variant and strict containment measures are expected to take a higher toll on the economy and society. The government may therefore need to further adapt its strategy towards a more open management of future outbreaks. Beijing will nonetheless take all measures possible to contain the outbreaks on the mainland and avoid a repeat of what has happened in Hong Kong." Sophie Reiß, Analyst MERICS

Le Yucheng (乐玉成) is one of the people named most often as a potential successor to Foreign Minister Wang Yi, who is expected to retire at next year’s National People’s Congress. Having studied Russian at university, Le gained professional experience on Sino-Russian relations early in his ensuing diplomatic career. Postings to China’s embassies in the Soviet Union and then Russia were followed by growing responsibility in the Eurasian Affairs department of the Ministry of Foreign Affairs. Since becoming Vice Foreign Minister in 2019, Le became one of the ministry’s main voices on China-Russia relations.

Over the last two years, Le has taken on increasingly high-profile appearances at home and abroad. He is also giving increasingly wide-ranging foreign-policy speeches, suggesting he is destined for a higher-ranking role. Although he does not veer into “wolf warrior” territory, Le is also often tapped to send strong messages on international issues – whether it is to criticize the US for supporting “Taiwan secessionists” and eroding China's sovereignty, or to blame NATO enlargement for the war in Ukraine, claiming that “NATO should have been consigned to history alongside the Warsaw Pact”.

Le is well connected. He was State Councilor Yang Jiechi’s deputy at the Office of the Central Foreign Affairs Leading Small Group (now Commission) from 2016 to 2018, right before being promoted to Vice Foreign Minister. He was named ambassador to India right before Xi Jinping’s first visit in 2014, in a move that some saw as a sign of Xi’s support. Now 58, Le is part of China’s new generation of top diplomats – and his Russia expertise could be a boon for Beijing given growing competition with the West.

During a meeting with his Russian counterpart Igor Morgulov in December 2021, he anticipated the direction in which Sino-Russian relations were moving. He announced the two countries’ “friendship has no end lines, cooperation has no forbidden areas, and mutual trust has no upper limits”. This line was echoed by the February 4 Sino-Russian Joint statement by Xi and Russian President Vladimir Putin. Le’s growing public profile confirms his status as a rising star within China’s foreign affairs establishment. 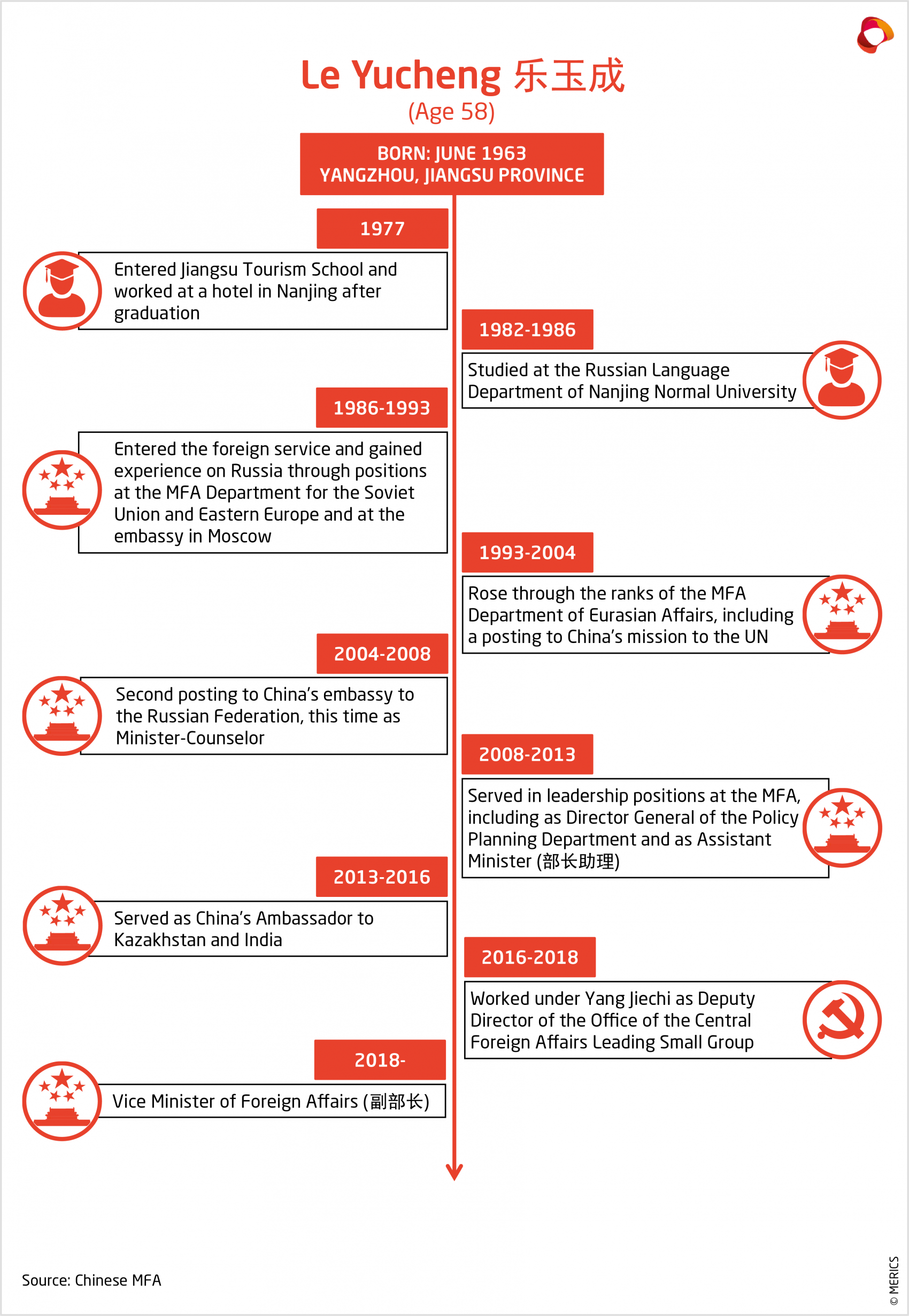 Plane crash: What to know about the Boeing 737 wreck where rescuers found no survivors (The Wall Street Journal)

A China Eastern Airlines plane carrying more than 130 people crashed in a mountainous area in southern China on Monday, March 21. The cause is still unclear. (2022/03/23)

This ChinaFile conversation looks at possible implications of China becoming the standards setter for technology and how other nations should react. (2022/03/22)

The nickel empire (The Wire China)

Xiang Guangda lost USD 8 billion as a result of fluctuations in the global nickel market. The Wire China analyzed who’s who in China’s nickel industry. (2022/03/20)

China’s divorce rate is down, but so are marriages (The New York Times)

Chinese statistics indicate that a new law has helped reduce the number of divorces across the country. But fewer people are getting married as well. (2022/03/23)