Huarong – a silent bail out that went wrong

The financial conglomerate’s near bankruptcy has been a setback for market discipline in China, argue Max Kärnfelt and François Chimits. The financial system has to ditch old habits.

Huarong, a financial conglomerate with debts of USD 22 billion, in April failed to publish its financial records for 2020, reviving fears about possible systemic risks lurking in the world’s largest financial system. That may have seemed far-fetched considering authorities’ control over finance and four years of reforms to clean up the sector and improve capital allocation. But Huarong did throw a stark light on the work they have to do to impose market discipline.

After the global financial crisis of 2008, Beijing launched a huge stimulus package. It loosened borrowing constraints on state-owned companies and local government and led to a flood of opaquely financed infrastructure. High growth was maintained, but the efficiency of allocating capital to sound projects suffered and financial risk built up. Debt-driven investment became the main growth driver (figure 1): asset-prices surged while debt levels spiraled – all in a complex system of financial channels backed by implicit public guarantee. 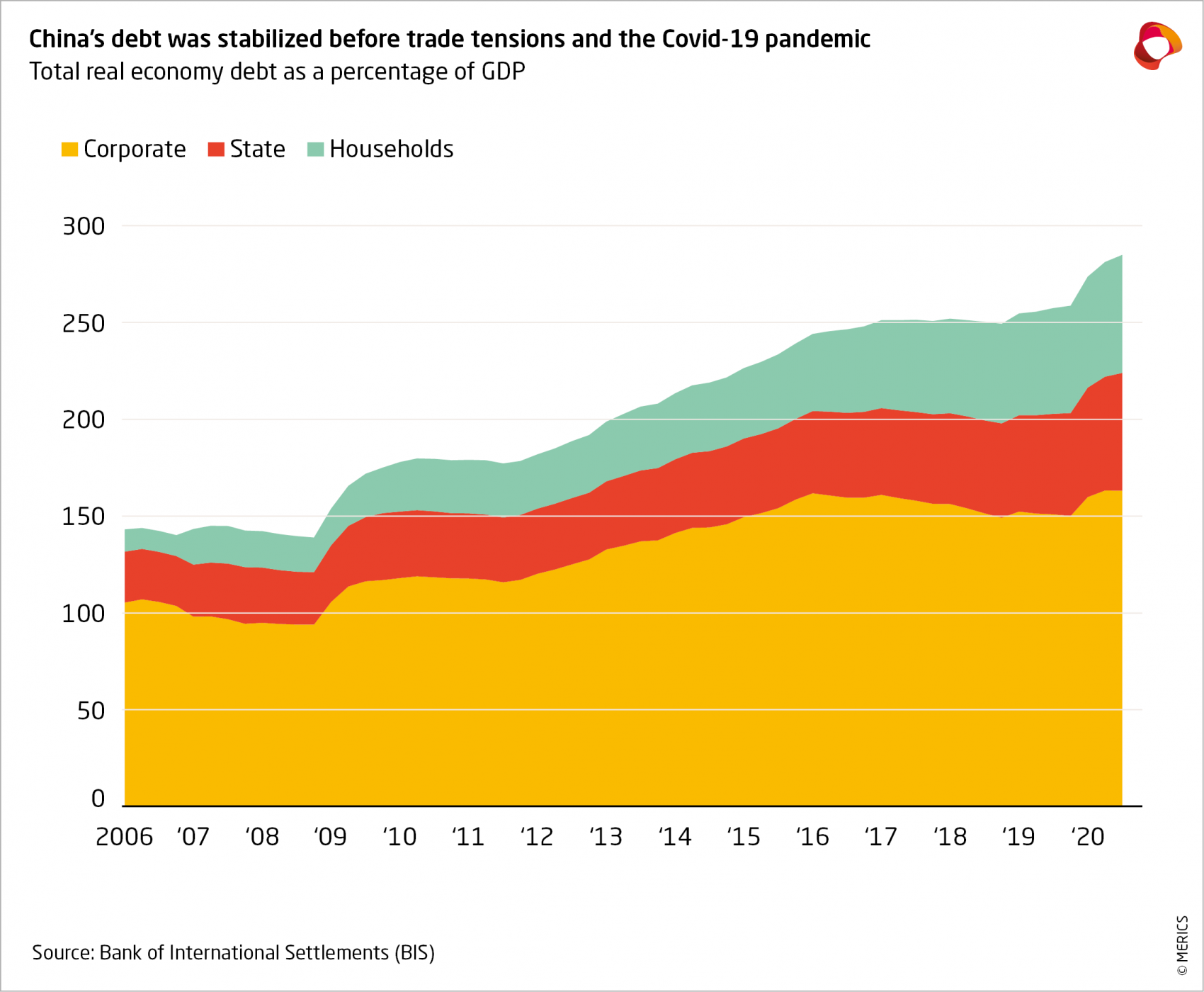 When China’s stock-market bubble burst in 2015, investors moved money out of the country, amplifying a self-reinforcing cycle: capital outflows put pressure on the yuan, which led to more outflows. In October 2017, China’s central bank governor warned of financial crisis and Xi Jinping made the fight against financial risk a priority. An IMF working paper found more than 15 percent of corporate debt – equivalent to about 30 percent of GDP – was at risk, and another IMF report showed similar buildups elsewhere had always sparked economic crises.

Growing yield spreads between the best-rated bonds and the others indicates investors now reward financial soundness (figure 2). China’s authorities proved their resolve by managing the 2019 trade tension with the US and the 2020 Covid-19 crisis with only limited relaxations. Since September 2020 have defaults resumed again, interest rates have bounced back, and regulations have hit property developers, financial holdings and fintechs. Xi confirmed this approach when he this year enshrined these efforts in China’s new development model. 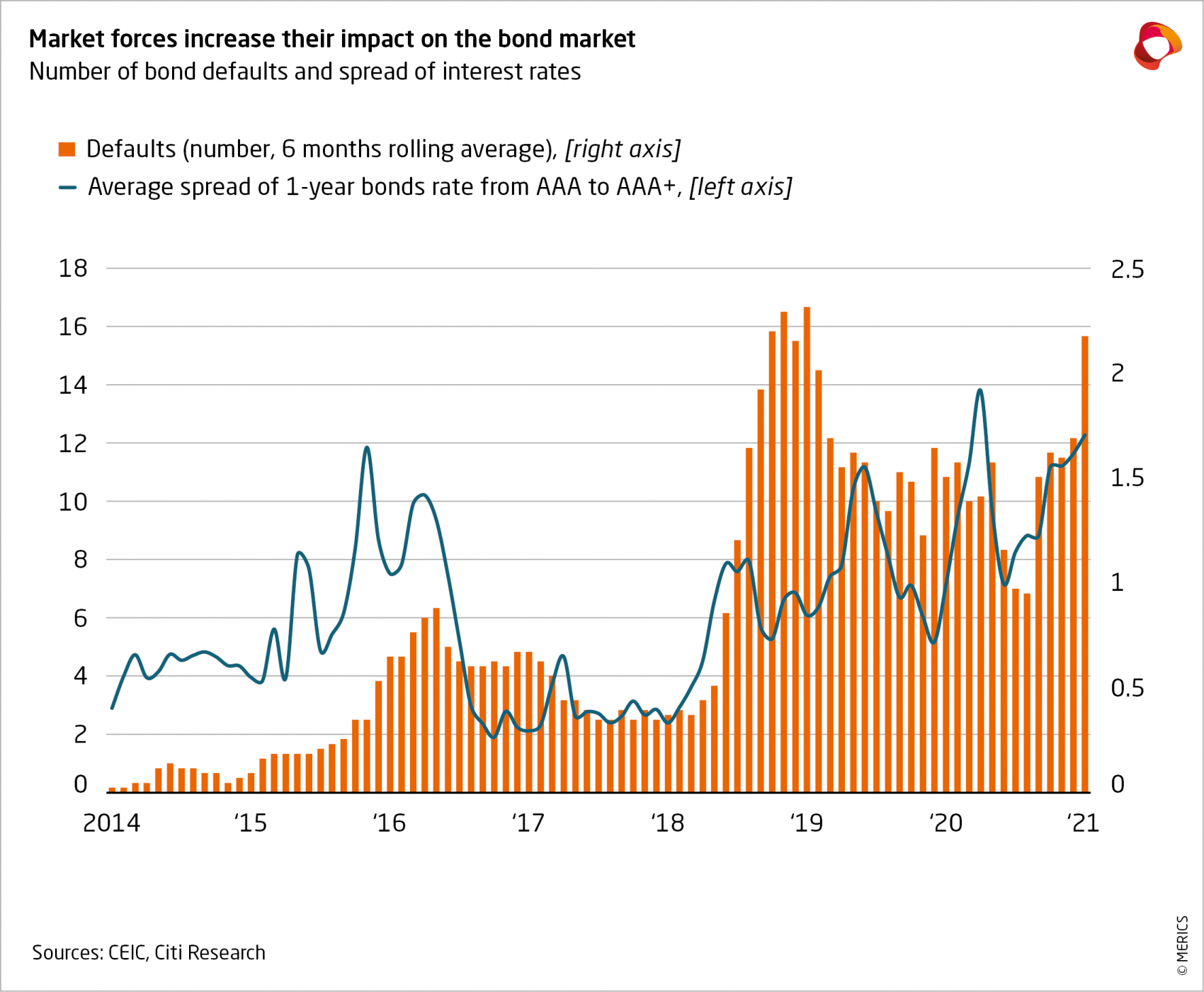 A bail out threatens market discipline

Huarong was one of the four entities created by the government in 1999 to clean up distressed debt after the Asian financial crisis. The institution went on to push into asset management and investment banking. Its assets grew sixfold between 2011 and 2017, with bad-debt management contributing less than a third. But in 2018, the company’s leadership was suddenly replaced by executives from state-owned banks and regulators. Beijing seemed in control, if also gruesomely so – ex-CEO Liao Xiaoming was executed in January after he was found guilty of bribery, corruption and bigamy.

When Huarong’s failure to publish financial data rocked the market in April, regulators had had three years to deal with the problem. The fact that authorities were taken aback by the crisis shines a light on a policy contradiction. Beijing’s desire to enforce market discipline implies the cost of bankruptcy will be borne by investors and not socialized through bailouts. But regulators fear that allowing a systemically important company to fail will badly shake China’s financial system – and that they might end up accountable for any ensuing crisis (a worry not assuaged by the opacity of the Chinese financial and political system).

Faced with this contradiction, the Chinese state developed an opaque mixed strategy. To ensure that Huarong did not trigger a damaging chain reaction, state banks were reportedly asked to provide emergency lending – and there is even talk that the PBOC used its own balance sheet to absorb assets. At the same time, the government will probably use behind-closed-doors restructuring negotiations to shift some of the cost of this silent bail out onto investors, as happened when Baoshang Bank defaulted in 2020. The bail out element will reinforce investors’ tendency to favor politically important companies, while the bail in will weaken their trust in the once iron-clad guarantee that some companies are too big to fail.

Beijing’s mixed strategy is a shift towards market discipline, but it is unclear exactly by how much. This suggests there is more trouble on the horizon. The credit-ratings firm S&P recently published research indicating that only 6.3 percent of the property developers it tracks comply with the central banks’ limits on indebtedness. This shows how the lack of a clear and transparent approach to dealing with struggling high-profile companies has allowed entrenched old habits to live on. The mixed strategy is limiting improvements to the efficiency of the capital allocation and feeding investors’ fears about rising junk assets.

The leadership in Beijing seems to be aware that the efficiency of the financial system must improve to continue catching up with advanced economies. Four years of reform and the explicit support of Xi indicate this is a priority. Despite successes in tempering credit growth, Huarong is a reminder that Beijing still has to deal with many of the effects of old habits and poor investments. The real test of its resolve to institute market discipline still lies ahead.