Beijing’s zero-Covid policy and Russia’s war on Ukraine have hit an already struggling Chinese economy hard. François Chimits says propping it up will come at a great long-term cost.

The Chinese economy is in a difficult situation in the middle of a year in which social stability is at the very top of the agenda as this fall’s once-every-five-year Congress of the Chinese Communist Party (CCP) comes into view. Restrained economic stimulus – captured in the official mantra of “no flood-like stimulus” and embodied in the continuation of defaults on the financial markets – has failed to produce the all-important growth of gross domestic product, forcing Beijing to return to its old-recipe of construction-led stimulus. In doing so, it risks undoing hard-won reforms and useful changes to resource allocation.

The lack of dynamism of domestic consumption have recently become apparent as Beijing's traditional growth drivers lost momentum. China’s impressive economic performance during the Covid-19 pandemic distracted from warnings about the sustainability of a dynamic mostly driven by exports and debt-financed investment. But then fading foreign demand for digital products and rising commodity prices moderated the former, while regulatory tightening, centered on real-estate and the digital economy, tamed the latter. 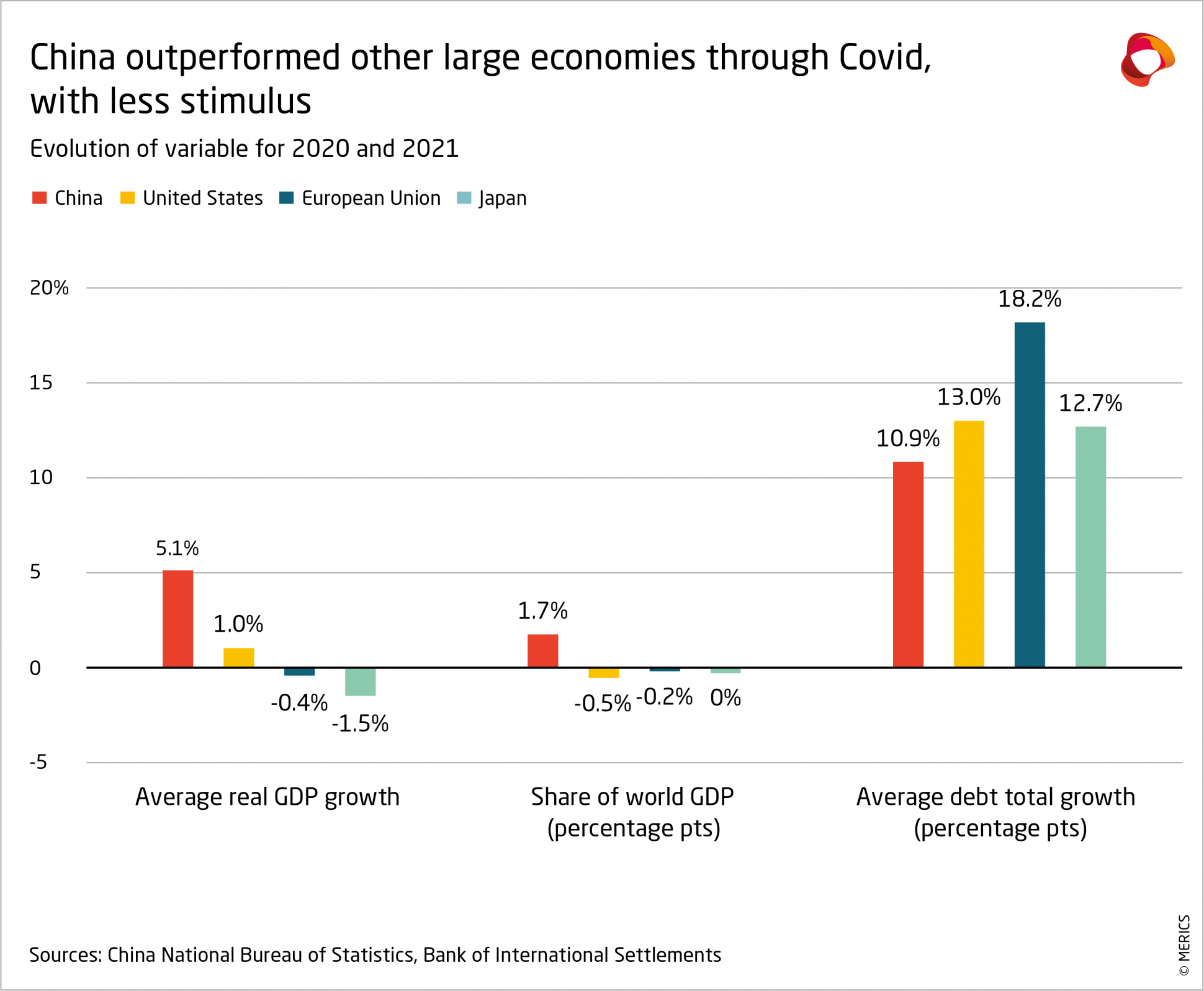 China is seeing prices rocket because of war-induced disruptions

Russia’s invasion of Ukraine and China’s rigorous zero-Covid policy then added to economic woes. As the world largest importer of most commodities and agri-food products, China is seeing prices rocket higher because of the war-induced disruptions. The geopolitical positioning of Beijing and financial uncertainty led to foreign capital that had poured in for 18 months flowing out again. And renewed lockdowns saw domestic demand plummet, production stall, and value-chains and distrust spread the shock throughout the economy. 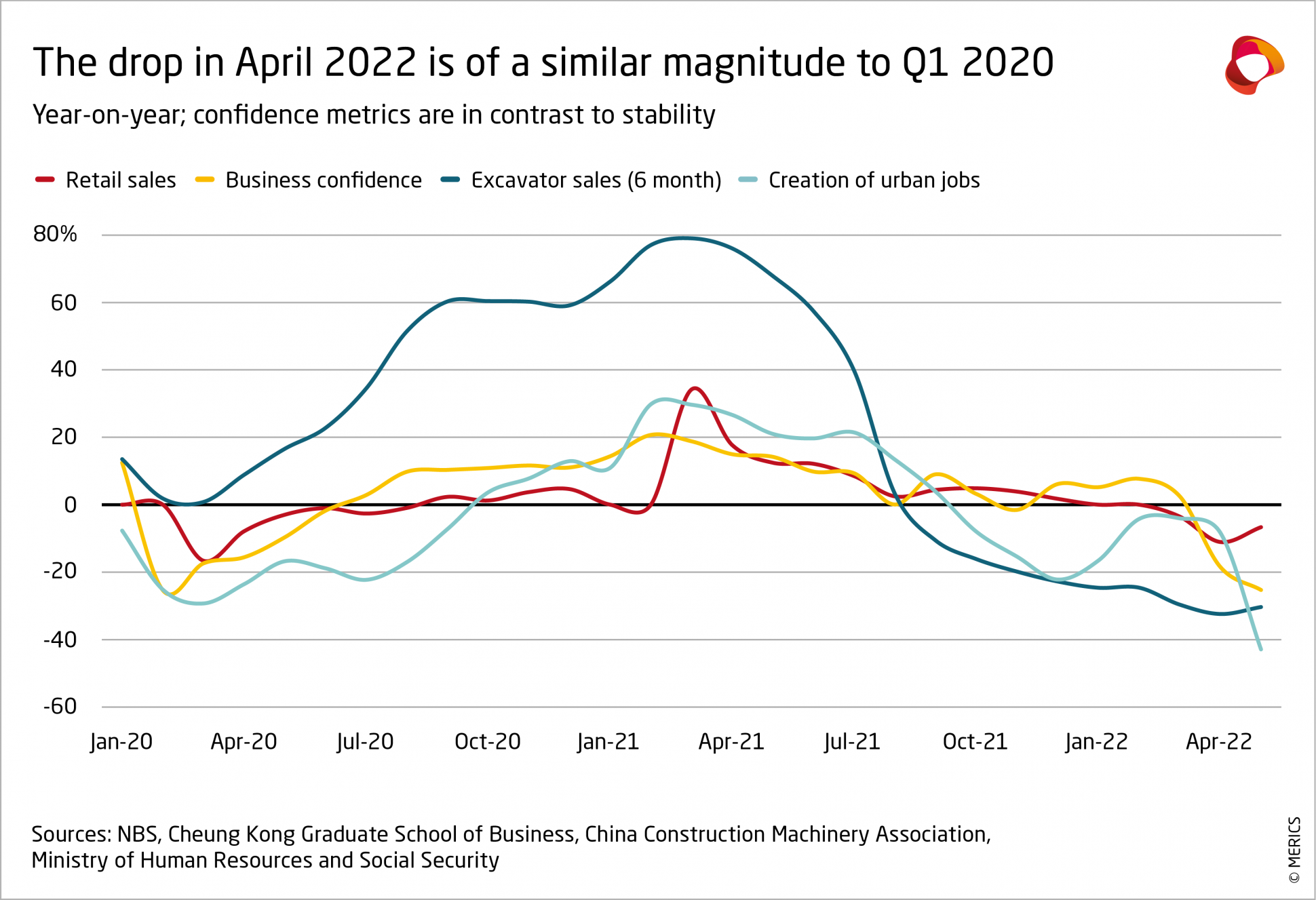 At first, Beijing appeared confident it could still reach its ambitious 5.5 percent GDP growth target for 2022 by pausing reforms and launching limited stimulus. Annual government plans, published in December, insisted on economic stability after a year of bold reforms. Indeed, the regulatory tightening that had characterized 2021 was paused and interest rates were lowered. In addition, first local easing measures on real-estate purchases were tolerated by Beijing.

Then Beijing felt impelled to up its game, with multiple measures to support production. Premier Li Keqiang acknowledged the dire situation in early April by making prices and employment the priority (implicitly abandoning this year’s growth target), while providing and calling for more support for the economy. He even organized ad hoc meetings to tell provincial authorities to do everything necessary to prevent economic activity sliding further. Xi Jinping’s economic tzar Liu He delivered clear pro-market calls, while financial institutions seem to have been mobilized to prop up financial markets.

But this was still not the type of flood-like stimulus Beijing had resorted to before ¬– and lending data for April were very disappointing. They showed the reluctance of banks to lend to households and give long-term loans to corporates, two areas explicitly prioritized by Beijing but highly sensitive to economic confidence. In addition, local governments were not rushing to apply for new bond issues, major defaults continued, and real-estate prices decreased all over the country. All this then led to a worrying increase in unemployment. 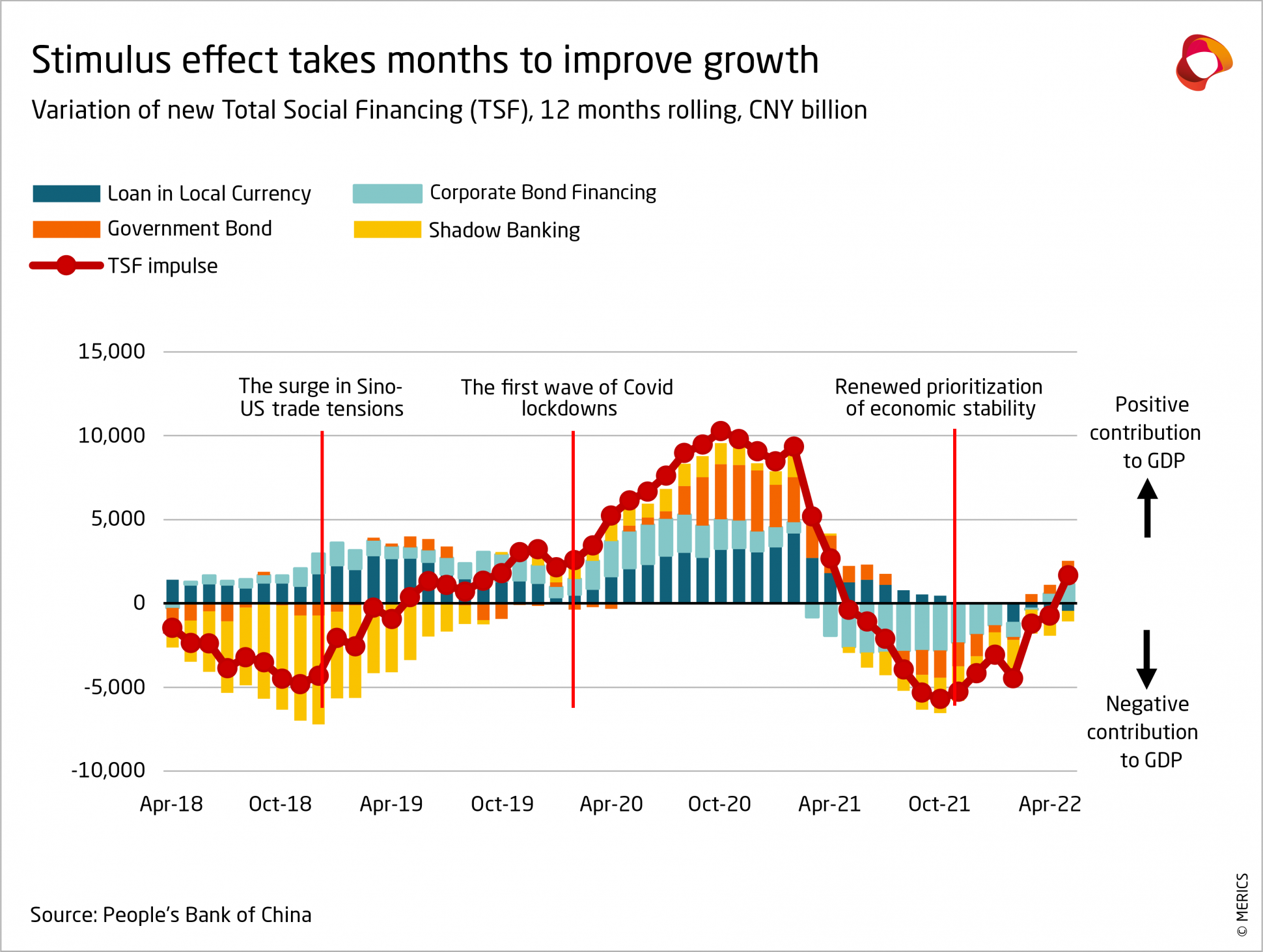 The problem was not so much that the CCP leadership had suddenly lost its economic touch, but that conflicting policy objectives were hindering a usually very responsive economy. Substantial reforms since 2012 have introduced market discipline, making it harder for Beijing to pilot growth in the short run: companies no longer benefit from the implicit guarantee of public bail-outs if they are aligned with state interests; real-estate prices are no longer guaranteed to only increase; the capacity of local governments to use debt-fueled financial resources to propel local growth or support local champions has been restricted.

But the resulting downward pressure on growth once again revived Beijing’s traditional trilemma – having to choose between the objectives of stable employment, better resource allocation (i.e., structural reforms) and stable public debt. Given that stable employment is the uncontestably overarching priority as the 20th CCP Congress looms, any ambitions for more structural reforms and steps towards debt sustainability have been shelved for the moment. As a result, Beijing is again looking for a quick rebound in economic growth.

A return to old stimulus methods will likely follow

A return to old stimulus methods will likely follow. One sign for that is Li using a late-May emergency meeting with thousands of local cadres to call for lowering the jobless rate “as soon as possible.” In consequence, local governments look set to go back to doing what they know best – to quickly ensure economic stability and jobs through debt-financed stimulus centered on construction, and public bailouts of struggling companies. Recently announced measures all point in that direction, while demand-side stimulus remains marginal at best.

Recent years’ hard-won improvements to internal economic imbalances – pushing back old industries, raising the efficiency of investment, getting to grips with public and corporate debt – look set to be partially reversed. The re-appearance of bad habits will delay the leadership’s preferred economic-development model based on technological innovation and economic efficiency. For sure, they will avert an all-out crash and buy Beijing time. But with a rapidly ageing population and a less favorable international environment, its economy will still quickly have to catch up with the productivity of advanced economies.