Climate Club idea needs adjustment if China is to be involved

Including China in a Climate Club, as proposed by German chancellor Olaf Scholz, would “catalyze climate action globally” and would be a groundbreaking reform of the international climate governance system. However, making progress with this idea requires addressing aspects in three key areas: how the club is launched, its design, and how trade tensions are managed, says MERICS Associate Analyst Barbara Pongratz.

Germany – and particularly the new chancellor Olaf Scholz – is using its G7 presidency to push its proposal of a Climate Club as an “alliance for climate, competitiveness and industry”.

The proposal, which is detailed in a white paper published in August 2021, is a reaction to the apparent inability of the current global climate governance system, based on the UNFCCC Paris Agreement, to stay on path towards the 1.5-degree target. The design of the system, where targets (Nationally Determined Contributions, NDCs) are self-imposed and non-binding, gives rise to the problem of environmental injustice caused by freeriding. Some countries are pushing ahead with mitigation measures, while others are taking a wait-and-see approach to avoid economic downside. The Climate Club is intended to solve this problem by creating a framework formed by the most ambitious for a common carbon price that offsets economic losses.

China is no natural fit for the club

China, currently the largest CO2 emitter, is an unlikely Climate Club member. A major reason is that, from Chinese commentators’ point of view, the Climate Club is a "developed country" idea of the "exclusive" G7. For China, the G7 means geopolitics and systemic conflict with the United States. When a proposal originates from this forum, it is viewed critically.

Aside from this, there is in any case very limited debate about the Climate Club in Chinese academia, media and policy circles, and more questions than understanding of the proposal and its goals. It seems unclear to Chinese observers whether this is a coalition of partners with a similar liberal and democratic mindset or a platform to discuss more technical issues such as carbon pricing and trade initiatives like the Carbon Border Adjustment Mechanism (CBAM).

Commentators who examine the Climate Club idea in more depth, however, seem to be generally in favor of it. One Chinese academic contribution analyzes the mammoth task of developing an effective policy system that would impose costs to reduce carbon emissions but also provide sufficient incentives for participation. Some observers have emphasized the huge challenge of forming a unified carbon emissions target price or have alluded to the “big question” of “who will arbitrate carbon e missions trading”. Another key concern is whether the Paris Agreement's principle of "Common but Differentiated Responsibilities", which requires China to bear less responsibility for climate action because of its lower historical total carbon emissions, will be upheld. 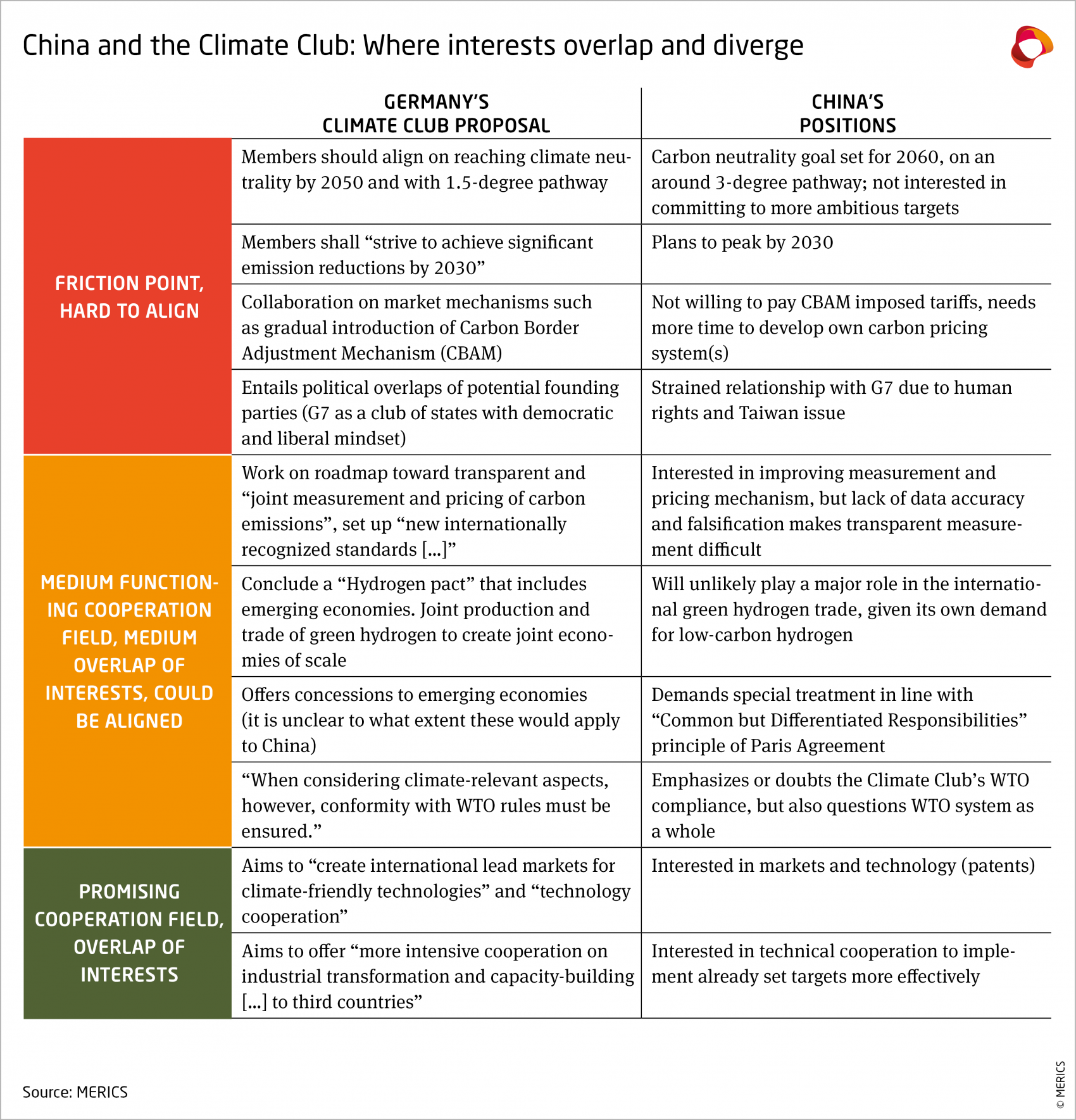 A more effective way to engage with China

First, engaging China could be more effective if the Climate Club proposal were embedded in or complemented existing formats. In parallel to pushing for a new framework for climate cooperation at the G7 summit, the idea could be brought forward at a UNFCCC event and linked more closely to that.

For domestic political reasons and distractions, such as focus on the upcoming party congress or the ongoing ministerial power struggle between the National Development and Reform Commission (NDRC) and the Ministry of Ecology and Environment (MEE), China will engage more effectively if the Climate Club is brought forward at COP27, for example. Institutional channels already exist, and no enormous political effort is needed to set up new structures. This could take the form of a more neutral alliance of the ambitious. The alliance could include all those countries whose NDCs are geared toward a path of 1.5 degrees Celsius (meaning also autocratic states like Morocco, for example).

Second, to have the prospect of engaging China in Climate Club discussions, careful club design is critical, and this includes the level of strictness of "club rules". The German proposal states firmly that “members will be committed to the 1.5- degree target of the Paris Agreement and accordingly to climate neutrality by 2050 at the latest (as a rule)”.

Given China's strong energy security drive, which it is currently pursuing vigorously and which must be taken into account in any kind of climate discussion, it is unlikely that it will adjust its 2060 carbon neutrality goal to be in line with the 1.5 degree target. Climate Club founding parties need to submit a comprehensive and inclusive proposal for categories of non-members. They need to carefully select exemptions and special treatment for emerging and developing countries including development pathways for non-members that do not yet comply with the rules.

Third, it will be important to manage prospective trade tensions introduced by a crucial element of the Climate Club: Border Adjustment Mechanisms. For example, in the framework of the EU CBAM, which is to be gradually phased in from 2023 onwards. This will involve a larger redesign of the international trading system for sustainable development. China will not be willing to pay unilaterally imposed tariffs introduced by CBAM at EU borders that soon.

While the EU seems determined to go ahead with the introduction of CBAM, it is noteworthy that the German proposal optimistically states, “if a border adjustment mechanism is even necessary”. There were already signs of potential counter-measures in China's Five-Year Plan for Foreign Trade, which introduced plans to set up a similar carbon footprint tracking system for foreign trade products. China is on its way but needs more time to develop its own carbon pricing system(s). It will be vital not to create further tensions, but to take advantage of synergies between EU and Chinese efforts.

Climate Club details to be defined

The current level of detail in Germany's proposal is still fairly low, with key decisions, like CBAM revenues, "to be made at a later date". With Chancellor Scholz's determined push to make the G7 a "nucleus of an international Climate Club", it will be incumbent on the German government to shape this coalition and design the modalities of openness of this Club.

Given the current situation of Russia’s war in Ukraine and the fact that climate debates have been replaced by discussions on energy security, just maintaining ambitious climate measures at current levels – rather than reducing them – already seems an acceptable, albeit unsatisfactory way forward. China's push for energy security in the current geopolitical context, the upcoming party congress, and the likely leadership reshuffle in November – including on the climate portfolio – are all factors that do not stand in favor of the country focusing on debates on a common carbon price and potentially joining a new Climate Club.

The success of the Climate Club's proposal will depend, in part, on whether the respective domestic debates on carbon pricing are sufficiently mature to allow for coordinated efforts. It will also depend on whether Germany can strike the right balance between providing carrots and sticks for initial non-members of the Climate Club. This means imposing costs to reduce carbon emissions and providing sufficient incentives for emerging economies such as China, among others, to participate.