Common prosperity did not fall from the sky

Earlier this year China celebrated the eradication of extreme poverty and a new goal of “common prosperity”. MERICS Senior Associate Fellow Bert Hofman assesses the options at China’s disposal for reaching that goal.

Deng Xiaoping famously said, in 1986, “Our policy is to let some people and some areas get rich first to drive and help the backward areas; first advanced areas later have the duty to help the backward areas.” He was speaking at the launch of the Coastal Development Strategy. Most have forgotten the second part, but not the Communist Party of China (CCP). On August 17, 2021 the Central Committee on Economy and Finance (CCEF), chaired by Xi Jinping, announced that “common prosperity” was to be the new goal.

This did not fall from the sky. The 2013 Decisions of the 3rd Plenum of the Central Committee focusing on economic reforms already stated: “We will improve the regulatory mechanism of income redistribution […]. We will regulate excessively high incomes, redefine and clear away hidden incomes, outlaw illegal incomes, increase the incomes of low-income groups, and increase the proportion of the middle-income group in society as a whole.”

With the “moderately prosperous society” achieved, the goalposts are shifting. In January 2021 Xi said in a major speech: “Realizing common prosperity is more than an economic goal. It is a major political issue that bears on our Party’s governance foundation. We cannot allow the gap between the rich and the poor to continue growing – for the poor to keep getting poorer while the rich continue growing richer. We cannot permit the wealth gap to become an unbridgeable gulf.” How will China achieve this new objective?

Interestingly, China’s policy change comes after a decade of declining income inequality. According to the World Bank, which uses consumption as a basis, the Gini coefficient, a widely used measure of inequality that varies between 0 (complete equality) and 100 (maximum inequality) peaked at a level of 44 in 2011. Since then, it has come down to 38 in 2016, the latest number available. China’s official Gini, published by the National Bureau of Statistics, is income based and now stands at some 47, not much down from the 49 measured at the peak, but down, nevertheless.

Meanwhile, the labor share in China’s economy is, according to the Penn World Tables, about 0.59, in line with many OECD countries. Indeed, in contrast to the developed world, where labor shares have been declining, China has seen a decade of rise in the labor share.

China does not stand out in wealth inequality either. According to Credit Suisse’s annual report on wealth distribution, in 2019, China’s wealth Gini was 70, which is equal to France’s and hardly up from a decade ago. 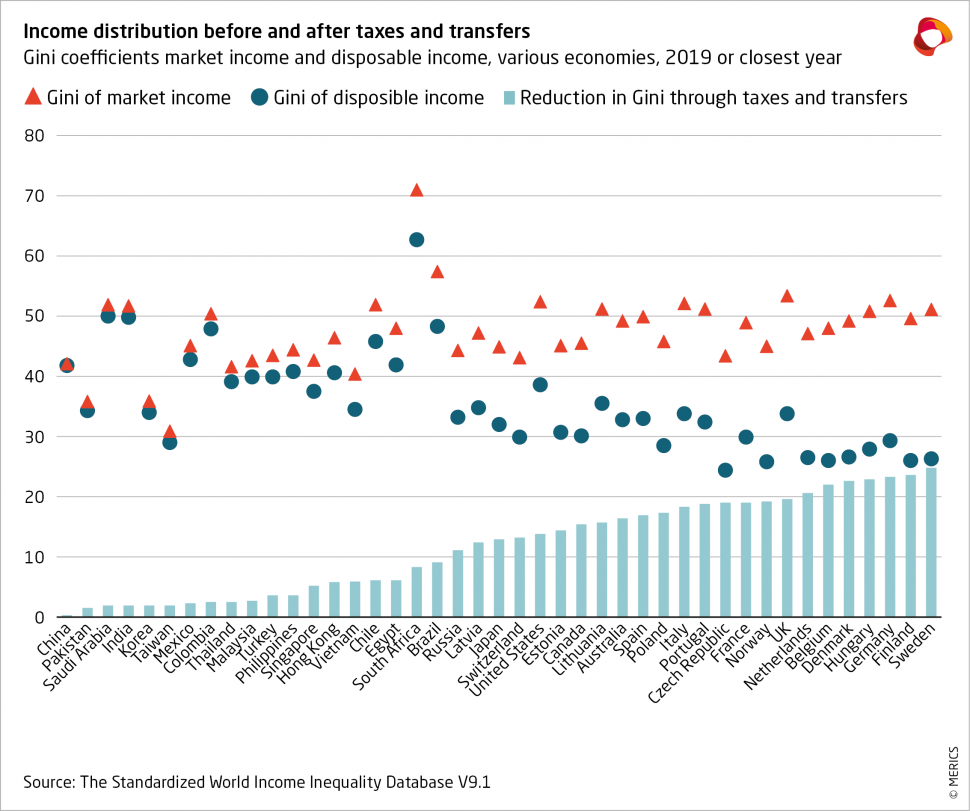 Where China stands out is the limited redistribution through the government budget. After redistribution through taxes and transfers, most European countries and the US have a more equal distribution than that of China (Exhibit 1). China’s income tax takings generate only 4 percent of all government revenues. This is far less than the 20 percent in revenues generated by income tax in the average OECD country. Moreover, an important income source for the rich is untaxed in China: capital gains.

The bulk of China’s tax revenues come from Value Added Tax (VAT), consumption (luxury) taxes and social security contributions. Arguably, these taxes have a higher burden on the less well-off than on the rich. And given the minimum contribution to social security at the low-income end, and the cap at higher incomes, these taxes are also regressive.

One option for remedying large inequalities is increasing rural pensions. Another is increasing dibao, or welfare, which, in most locations, is well below the poverty line.

The other choice for China is to ensure that market outcomes become more equal by, for example, investing in education, especially rural education. Abolishing the household registration system, hukou, would allow workers to go to the place where they can earn most. Finally, further reforms in rural land management would strengthen farmers’ rights and therefore the price they can get for land rights when sold or leased.

For now, China seems to be opting for a different approach. The rich are being encouraged to make bigger donations for social purposes as a means to redistribute income. China could certainly use more philanthropy: according to the Global Philanthropy Report, spending from philanthropic foundations is only USD 4.7 billion per year, or less than 0.03 percent of GDP. However, even the most generous countries, such as Germany and the Netherlands still spend less than a percent of GDP. So, while more philanthropy in China is definitely welcome, it is unlikely to make a major dent in the income and wealth distribution. 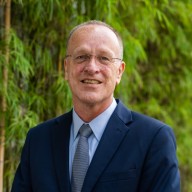