Working as a long-range weather forecaster in the US army, economist and Nobel laureate Kenneth Arrow once asked his superiors to be relieved of duty. His forecasts were no better than guesswork, he argued.

His request was refused outright: “The commanding general is well aware that the forecasts are no good. However, he needs them for planning purposes.”

Forecasting political developments, too, is frustrating work. Anyone trying to gain a level of certainty about an inherently uncertain future faces many obstacles. This holds especially true for China, where information is highly controlled and decisions are taken behind closed doors.

But that does not make forecasting futile. On the contrary, it makes it more necessary. Insights gained from forecasting make uncertainty more manageable. It facilitates contingency planning and the development of longer-term strategies.

Consequently, in addition to the annual MERICS China Forecast, we have decided to examine the 2022 forecasts from five other organizations (Eurasia Group, Economist, EY, Control Risks and SupChina), and analyze their expectations for China’s development and foreign relations.

The aggregate results paint a pessimistic picture for 2022. 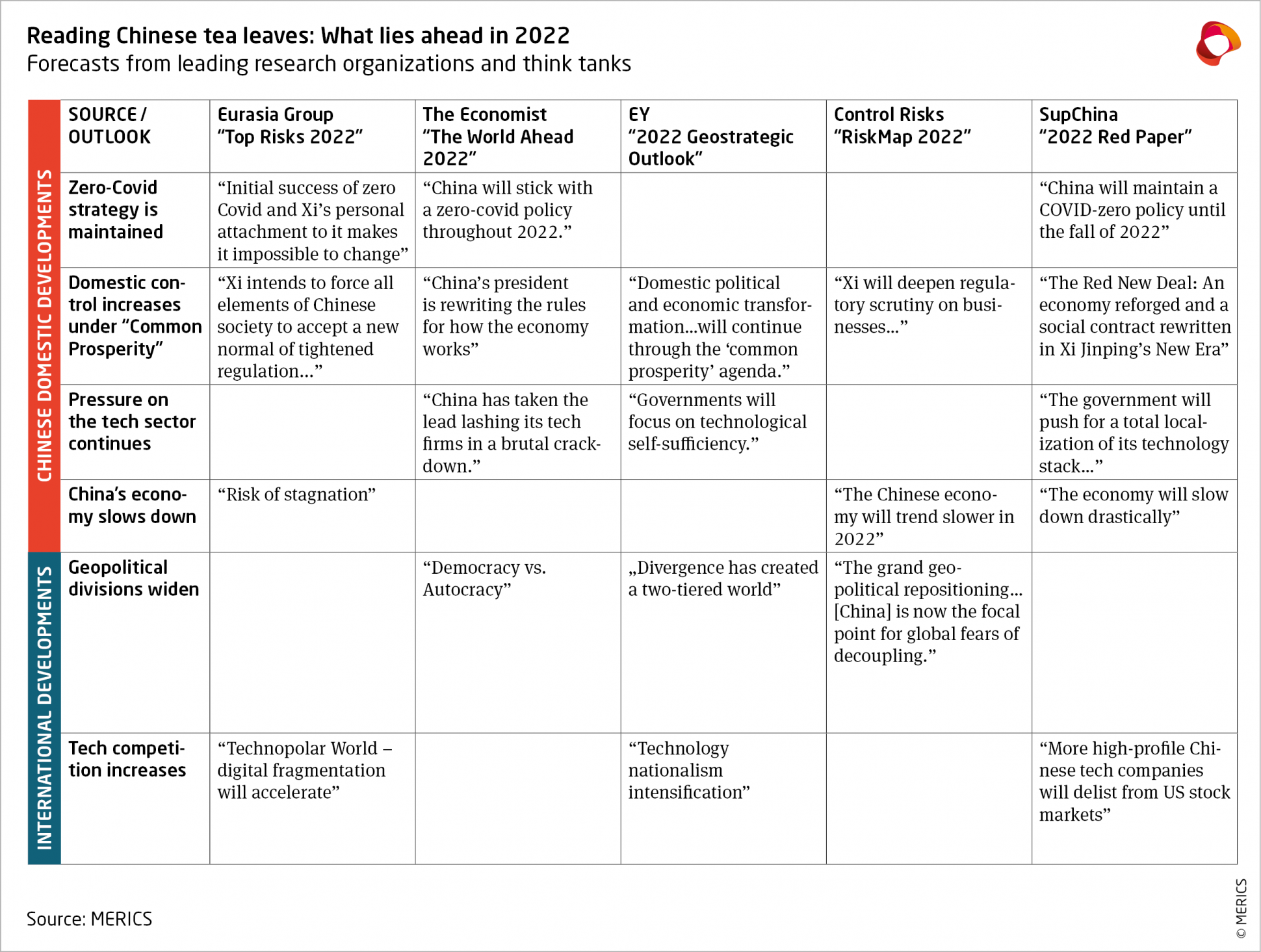 1. In a bid for domestic control, China is closing down

All forecasts predict an increasingly inward-looking China, overshadowed by the 20th Party Congress and the likely re-election of Xi Jinping. Given this underlying driver, controlling the domestic environment will be critical. This will play out in different spheres.

First, China is expected to maintain its zero-Covid policy for now. However, the infectious Omicron variant will make this increasingly difficult and Beijing will be forced to resort to tougher measures – as illustrated by the Xi’an lockdown. It is also unlikely that China will re-open its borders in 2022, according to the Economist. Eurasia Group predicts that China’s zero-Covid policy will eventually fail as it puts pressure on the economy and leads to higher public frustration, while SupChina believes the policy will remain in place at least until after the 20th Party Congress. There have been speculations that China could allow some regions to ease restrictions after the annual meetings of the National People’s Congress and the Chinese People’s Political Consultative Conference in March.

Second, in accordance with the policy of “Common Prosperity” the CCP is likely to expand economic and social control. All of the forecasts analyzed anticipate that there will be an increase in regulation. The Economist foresees Xi Jinping “rewriting the rules for how the economy works”, Control Risks expects Xi to “deepen regulatory scrutiny on businesses across issues such as antitrust, data security, and social responsibility, while pushing tax reforms”, and SupChina sees “an economy reforged and a social contract rewritten” with Beijing even tackling its demographic crisis by enacting “ever-more invasive policies around reproduction”. Eurasia Group captures the extent of this tightening of domestic control: “Xi intends to force all elements of Chinese society to accept a new normal of tightened regulation that spans the political, ideological, social and economic spheres.”

Third, the tech sector will continue to be particularly affected by this agenda. China has “taken the lead lashing its tech firms in a brutal crackdown”, according to The Economist. This policy is expected to last. SupChina anticipates the government to “push for a total localization of its technology stack”, while EY sees a “focus on technological self-sufficiency”. Recent complaints from China’s Ministry of Transport about delivery platform operators, as well as corruption allegations made by China’s state broadcaster against Jack Ma’s Ant Group, indicate that the tech crackdown is far from over.

The closing up of wider swathes of China adds downward pressure on the economy. Three out of the five forecasts expect China’s economy to sputter. Eurasia Group sees Xi’s policy increasing the “risk of stagnation at a time when the Chinese economy is on a weak footing”, Control Risks anticipates China’s economy to “trend slower in 2022”, while SupChina predicts the economy to “slow down drastically” as the country reshuffles its economic machinery by deflating its real estate sector and reinvesting in sectors that drive “stable growth”. Weakening GDP growth in Q4 (see MERICS Economic Indicators Q4/2021) is expected to continue into 2022.

2. Decoupling and geopolitical divisions are likely to increase

These domestic trends have international implications. The zero-Covid policy, for example, inhibits cross-border business, people-to-people contact, and is likely to cause backlog in Chinese ports, further straining global supply chains.

In aggregate, the forecasts essentially foresee increased decoupling and geopolitical divisions. The Economist stresses the systemic rivalry between the United States and China, pointing out that the US mid-term elections and 20th Party Congress in Beijing will put a spotlight on the theme of “democracy vs. autocracy”. Control Risks argues that China is “now the focal point for global fears of decoupling”, while EY states that “divergence has created a two-tiered world”. This stands in contrast to Eurasia Group, which admits there are divergence tendencies but argues that a “Cold War 2.0” is a red herring: “Washington’s economy and Beijing’s are becoming more, not less, integrated overall.”

Decoupling is expected to play out in the tech sphere, in particular. Eurasia Group labels it the “Technopolar World” where “digital fragmentation will accelerate, and disruptions to economically important tech supply chains” will increase, while EY speaks of an intensified “technology nationalism”. SupChina makes a more concrete forecast, anticipating that “more high-profile Chinese tech companies will delist from US stock markets”.

Although not highlighted in the forecasts examined, there seems to be a reasonable likelihood of increasing divergence in the broader financial, monetary and economic sphere. This can lead to political tensions and further strain on business and the global economy.

Both China and the United States are increasing state control over financial markets. China has proposed stricter rules for companies listing overseas and the US Securities and Exchange Commission has issued new disclosure requirements to Chinese companies. 2022 might therefore not just see more delisting of Chinese companies from Western stock exchanges (as SupChina highlighted for the tech sector), but also fewer initial public offerings of Chinese companies in the West and more in China.

Tensions could arise over monetary policy and economic growth. Alicia Garcia-Herrero has highlighted the trend of monetary decoupling, with the People’s Bank of China cutting rates  while Western central banks engage in monetary tightening due to inflationary pressures. This, in turn, slows economic growth in Asia. Li Xingqian, head of the foreign trade department at China’s Ministry of Commerce, has already criticized countries for cutting their stimulus too fast and hurting Chinese exports.

Last, there is a continued risk in 2022 of further trade and economic tensions. The EU sent a complaint to the WTO regarding Chinese economic pressure on Lithuania. Brussels is expected to strengthen its trade defense toolbox with an anti-coercion instrument, anti-foreign subsidies regulation and international procurement instrument. All could be employed against Beijing. Additionally, due diligence legislation will put pressure on businesses sourcing products from Xinjiang. Eurasia Group has been the only forecaster highlighting this issue, pointing out that corporations will be “caught between the West and China” as they face a two-way risk: “If they speak out against forced labor in China, they face fury from Chinese regulators and consumers. If they don't, they face backlash from regulators and consumers in the [West].”