What do young Chinese think about social credit? It's complicated

One of China’s most controversial recent government projects is the “social credit system” (社会信用体系, shehui xinyong tixi). It originated from the shortcomings of the consumer credit system and retail banking within the People’s Republic of China (PRC). Initially, it was conceived of as a way to compensate for the lack of financial credit scores and similar data on individuals to evaluate trustworthiness and creditworthiness. Lack of trust is a burden for China’s economy as it makes lending difficult and facilitates fraud. However, the idea quickly expanded to include many aspects of anti-social behavior as defined by the government.

Although the phrase “social credit system” has become familiar, and widely reported on in Western media, there is as yet no single, centrally coordinated system. Rather, there are a large number of different measures and pilot projects.

Government bodies implement the core of the system. However, many non-mandatory spin-offs have emerged. Several hundred policy documents have been produced by central, provincial and local government institutions. The rollout remains in the experimental phase and is taking place around China an uneven way.
There are three different target groups for measures rolled out under the social credit framework:

Projects that target individuals have varied goals and differ in the amount of data collected and the consequences of a certain score. Some deal solely with financial transactions and resemble the credit rating agencies common in other countries, such as FICO in the United States or Germany’s Schufa (General Credit Protection Agency). However, the most ambitious and potentially controversial pilot projects aim to steer people’s daily lives using automatized observation and a sophisticated system of sanctions to enforce the desired behavior.

Western observers have been puzzled at why, given the radical scope of these proposals, there has not been more resistance in China. In discussions of the social credit system, it is often assumed or implied that Chinese people simply care less about surveillance or their privacy than Westerners. While it is true that many ideas associated with the social credit system are indeed seen very critically by many Westerners, it is much more difficult to obtain an objective view of how people in China think about such issues. Genia Kostka of the Freie Universität Berlin published the first survey on the topic in 2019, titled “China’s social credit systems and public opinion: Explaining high levels of approval.” She found generally high approval rates for the social credit system as a whole,1 with the highest approval rates among wealthier, older and better-educated city dwellers.

Given that the construction of social credit is a package consisting of a range of different policies and, as implementation advances, more and more Chinese are confronted with these measures in their daily lives, it is important to revisit the issue by looking at more concrete examples.

We therefore conducted an anonymous internet survey from December 2018 to April 2019 among university students from three Chinese universities located in different parts of the PRC. We then compared the results with identical surveys carried out in Germany and Taiwan at the same time. In total, 553 students took part: 215 from mainland China, 227 from Germany and 61 from Taiwan. In addition, we collected data from 142 subjects from various other countries (outside China, Taiwan and Germany). Although the respondents are not representative of the general population, they constitute an important sub-group in Chinese society, namely urban, educated young people, that the PRC party-state particularly cares about.

We took examples of real pilot projects in China and briefly introduced the different policy proposals to the participants. As we were most interested in how people think about social credit systems ranking individuals, we chose measures that apply ratings or sanctions to individuals, rather than to enterprises or institutions:

Approval ratings in China were somewhat smaller than in Kostka’s survey. Overall, between 41 and 57 percent of the participants had a “positive” or “very positive” opinion about the projects. There were also slight differences between the proposals: The most-liked one was proposal 2, involving immediate fines for traffic violations, and the least popular was proposal 1 where individuals are asked to reprimand fellow-citizens over non-payments. There was also significant opposition, particularly to proposal 1, which 31 percent rated negatively or very negatively, and to proposal 3 suggesting aggregate individual scores and personalized sanctions for a range of behaviors – it got a 23 percent “negative” or “very negative” response.

The results show the absence of either uniform approval or disapproval towards social credit systems among PRC university students: opinions are mixed. If we were to translate the opinions into school grades (very positive=A, very negative=F), the proposals would only get a C+ (“satisfactory”). Nevertheless, average agreement with such measures was much higher than among respondents in Germany, where none of the projects got more than 19 percent approval.

There are several possible explanations for why China’s citizens like or dislike these proposals. The survey findings mirrored some frequently stated arguments for and against building social credit profiles. On the positive side, there was the potential for increased trust among strangers; reduced crime and greater economic benefits. Cons included threats posed by hackers, privacy concerns, negative consequences of mistakes, rules in favor of institutions but not the people, government surveillance, and sharing data with private companies. Agreements to the positive effects were very similar across survey respondents of different national origins, with reduced crime seen as the biggest advantage.

However, the perceived risks reveal remarkable differences: in China, respondents reported the highest concerns over the risk of government surveillance and government institutions putting their own interests first. Interestingly, sharing huge amounts of data with private companies was seen as much less of a problem. This seems counterintuitive since in recent years, China’s official media has
frequently discussed data privacy with a focus on the protection of individuals from overreach by private companies.2 Overreach on the part of the government is rarely if ever addressed in China’s official media coverage. Therefore, one might assume that PRC students would also be primarily concerned about surveillance and abuse of data by private entities rather than government surveillance, but this is not the case.

We would argue that there are several possible reasons why Chinese respondents generally evaluated social credit systems less negatively than interviewees in Germany:

To test whether culture can explain the gap, a look at China’s neighbor, Taiwan, canhelp. While culturally definitely much closer to China than to Germany, Taiwan is a vigorous democracy with a free press. How do Taiwanese view the social credit systems? Exhibit 1 shows the average view of the four proposals for respondents in Taiwan, Germany and China. We see that respondents from Taiwan fell in between respondents from Germany and China. Translated into grades from A to F, Germans would award the proposals a D, Taiwanese would give a C–, and Chinese a C+. Cultural differences would therefore seem to play a role,6 but they cannot fully explain why PRC citizens not more negative about social credit systems. 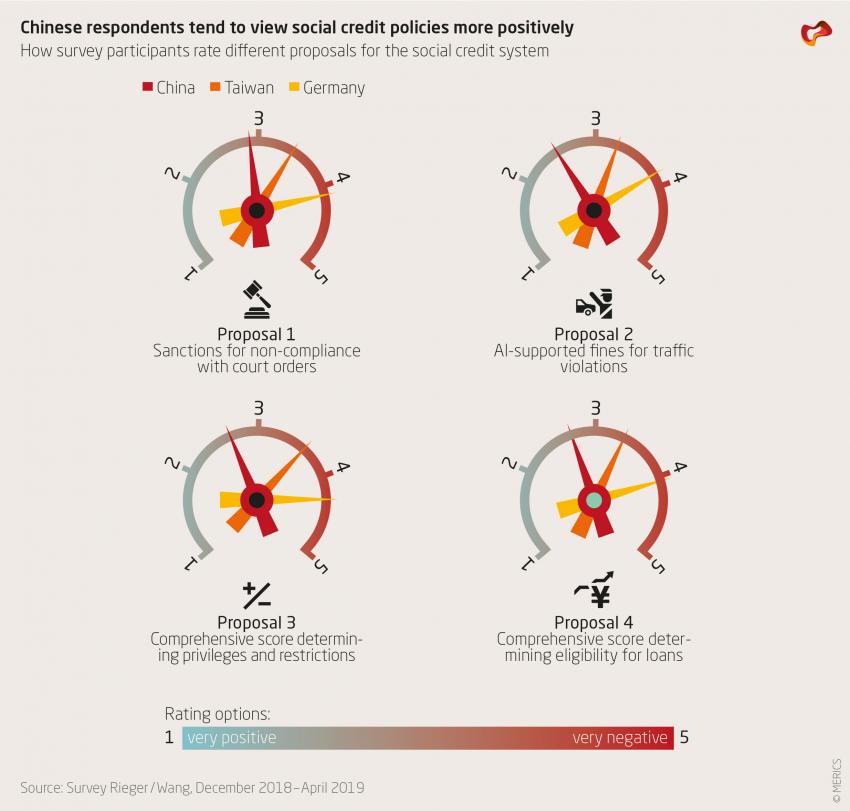 One possible explanation is that Chinese are more concerned about lack of trust and public safety. In our survey, we also elicited trust in strangers (using a trust game)7 and asked questions about perception of personal safety (“Do you feel safe alone at night in a city or the area where you live?”).

China-based respondents showed significantly lower trust levels compared to German or Taiwanese respondents. They also significantly felt less safe. It is conceivable that higher concerns in China (whether or not they are based on actual dangers) lead people to rank the benefits of social credit systems more highly and judge them more positively. 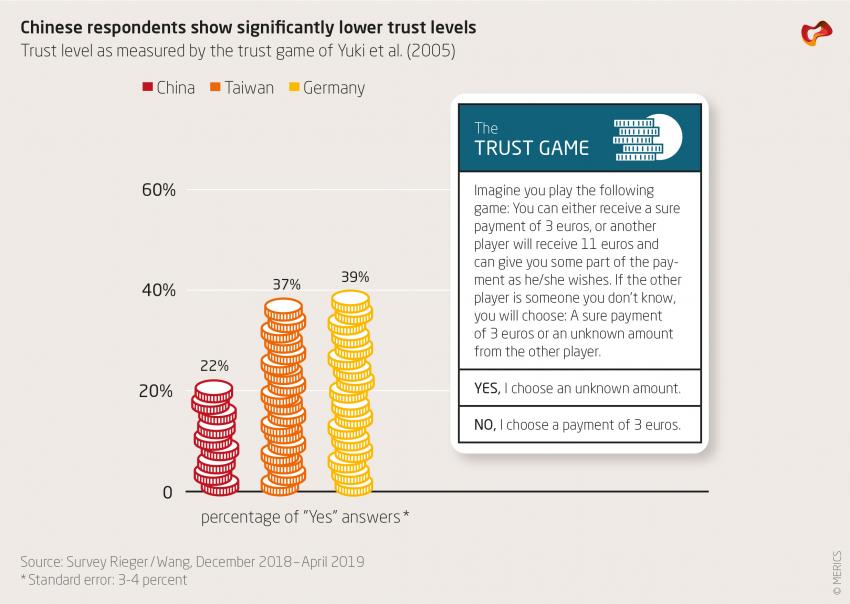 Censorship in the PRC provides another possible explanation for the higher approval ratings. We tested this possible explanation in two ways: first, we elicited what participants thought was the overall opinion of media on social credit systems. The most striking observation was that the percentage of participants who had “never seen or read anything about this [i.e. the various measures within the social credit framework] in the media” was highest in China: 30 percent. One would expect this percentage to be the lowest in the country where these proposals are actually being implemented. In Taiwan, 29 percent had never heard about it, but in Germany, only 15 percent stated they had never seen the social credit system mentioned in media. 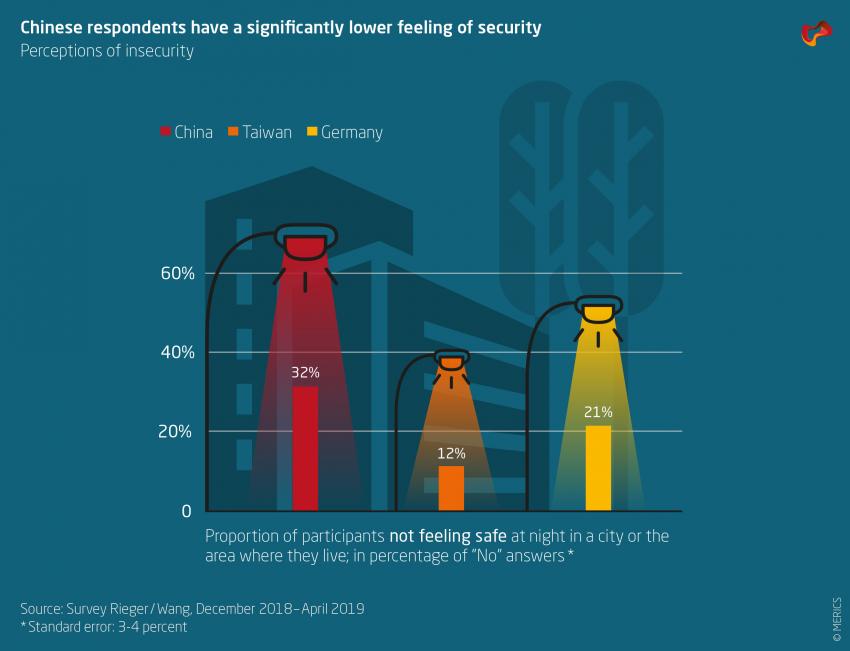 Initially, we might have ascribed this to the German media’s emphasis on data protection topics. However, among the 142 respondents from countries outside China, Taiwan and Germany, only 16 percent had never heard of China’s social credit system – a similar proportion as among Germans.

The surprising lack of information among students in the PRC could be explainable by factors other than censorship, e.g. Chinese university students focusing more intently on their studies and have less time to follow the news. Similar academic pressures could explain why Taiwanese students did not see much of the topic in the media. However, where Chinese respondents had read media reports on the social credit system, those reports were on average considered to be more positive than news reports seen that Taiwanese or Germans had seen.

A second test revealed the impact of censorship (or more general a media bias) more directly: After being exposed to information on the potential benefits and dangers of social credit systems, we asked the subjects once more to judge proposal 3, i.e. an aggregated individual score based on a range of behaviors. In Taiwan, the judgment did not change and in Germany it was slightly more positive.8 Chinese respondents adjusted their opinion substantially downwards: instead of 53 percent, now only 29 percent thought about the project as “positive” or “very positive” (Exhibit 4), in other words, very little information, presented in an intentionally neutral way, can change opinions tremendously. This suggests that the information level before was low. The most likely cause of this is censorship and selective coverage: As previous studies have shown, Chinese media focuses predominantly on the positive aspects of the social credit system and its problem-solving potential.9 In addition, discussion of the topic has been censored on Chinese discussion platforms. 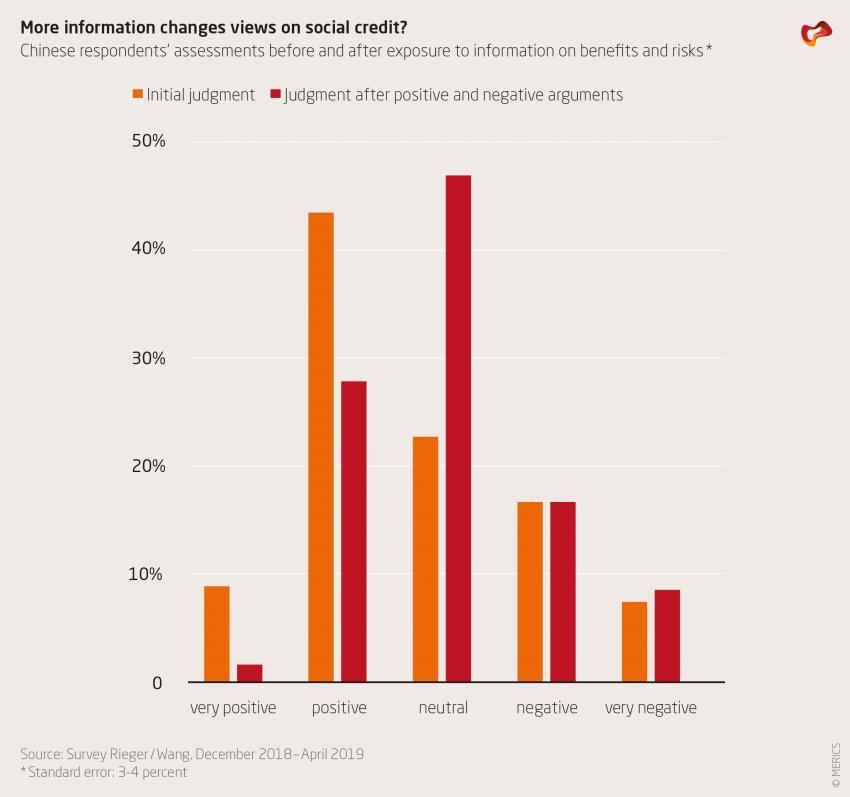 To sum up, the social credit framework is not uncontroversial in China, though respondents there showed a higher acceptance of it than in Germany. The difference can be explained by a mixture of cultural differences; widespread worries in the PRC about safety and trust; and censorship, which has prevented PRC citizens from reading about the potential dangers of the new social credit framework. However, once they become aware of associated risks, they showed substantially less acceptance.

More research on the public perception of social credit in China is needed, especially as new measures are continuously rolled out and the framework touches more and more people’s lives. Such research might include public opinion on other measures within the social credit policy framework, including how people perceive policies that implicate the family or friends of a “social credit offender” who may also have their scores affected.

Overall, we believe it likely that the social credit initiative will receive a more positive evaluation in China than in Germany or other European countries. However, this survey’s preliminary findings show that the picture is more complex than previously thought. While cultural factors may contribute to a somewhat wider acceptance of the policy, no easy generalizations are possible. 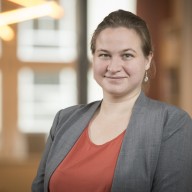