China wades into the Israel-Palestine conflict once more

The Israel-Palestine conflict re-erupted in mid-May, leading to the worst violence and unrest in the region in years. Beijing initially limited itself to calling for restraint from both parties. It took a clearer stance as the situation escalated.

China’s Foreign Minister Wang Yi called for an immediate ceasefire at a May 16 United Nations Security Council (UNSC) open debate on the issue. Wang also put forward China’s four-point proposal, which involved: (1) calling for a ceasefire and for Israel in particular to exercise restraint, (2) calling on the international community to provide humanitarian assistance to Palestine and on Israel to lift the blockade on Gaza, (3) urging the UNSC to take action, (4) providing support for the ‘two-state solution’. Wang also offered to mediate between Israel and Palestine, inviting both sides to “engage in direct talks in China.”

Beijing’s offer to mediate between Israel and Palestine is not a new phenomenon. China has been making similar offers and putting forward largely similar proposals to settle the Israel-Palestine conflict for years.

Beijing first appointed a Special Envoy to the Middle East on September 17, 2002. His responsibilities included mediation between Israel and Palestine and urging the two sides to “return to the negotiating table as soon as possible.” Given China’s longstanding policy of non-interference in the affairs of other countries, the appointment was framed as a response to the two parties’ calls for China to play a bigger role in the region due to dissatisfaction with the United States’ peace proposals.

In 2003, China put forward its first Five-Point Proposal on the issue, which was followed by a flurry of regional visits by successive Special Envoys. Since then, China has repeatedly presented similar proposals, with slight variations in the number of points. President Xi Jinping introduced a new Four-Point Peace Proposal in May 2013. The content of these proposals remained largely similar throughout the years.

China has also already hosted talks between Israel and Palestine. Xi offered to host trilateral talks in July 2017, during a visit to Beijing by Palestinian President Mahmoud Abbas. A peace symposium then took place in Beijing in December 2017, attended by delegates from Israel and Palestine. The talks were largely unsuccessful, with both sides reportedly unwilling even to hold a joint press conference. The only substantial outcome was a non-binding declaration that called for a ‘two-state solution’ and recognized China’s potentially valuable role in promoting peace talks.

All in all, Beijing’s position on the Israel-Palestine issue has remained broadly identical for years. China’s leadership has repeated its Four- (initially Five-) Point Peace Proposal at various stages; it has continued to offer mediation but has largely limited its response to rhetoric. Wang’s speech at the UNSC on May 16 should therefore come as no surprise.

Battle of the narratives

China’s involvement in conflicts that do not involve its own core interests generally stems from the desire to preserve stability in countries with which it has close economic ties – typically countries within the Belt and Road Initiative (BRI). The security of Chinese citizens and companies operating there is also a consideration.

However, BRI-zone stability cannot sufficiently explain China’s stance towards Israel and Palestine. Although Palestine has reportedly signed a BRI MoU with China, Israel – which counts as one of the most stable countries in the region – has not. The Israeli government has been pursuing deeper economic cooperation with China, yet the relationship remains limited. The Israeli government cannot afford to ignore US concerns about Chinese investment in Israel or potential transfers of technology to China.

China’s response to the Israel-Palestine conflict is largely a geopolitical one. Beijing’s offers to mediate help China burnish its responsible global power credentials by offering an (admittedly vague) alternative path to settle the dispute – in contrast to longstanding US support for Israel. China also hopes to play up its image in the region as a relatively honest broker, lacking the historical baggage of the US or European countries.

Wang was very clear on this point at the UNSC. He blamed the US for “obstructing” the UNSC to protect its close ally of Israel, after Washington had reportedly blocked a joint resolution condemning the escalation of the conflict. Ministry of Foreign Affairs spokesperson Zhao Lijian took this criticism a step further by questioning US commitment to the rules-based international order and attacked Washington for “using human rights as a cover” while caring only about the rights of some Muslims – a veiled but clear reference to US criticism of human rights violations in Xinjiang.

The Israel-Palestine conflict has therefore become another element in the broader US-China geopolitical competition and battle of narratives. 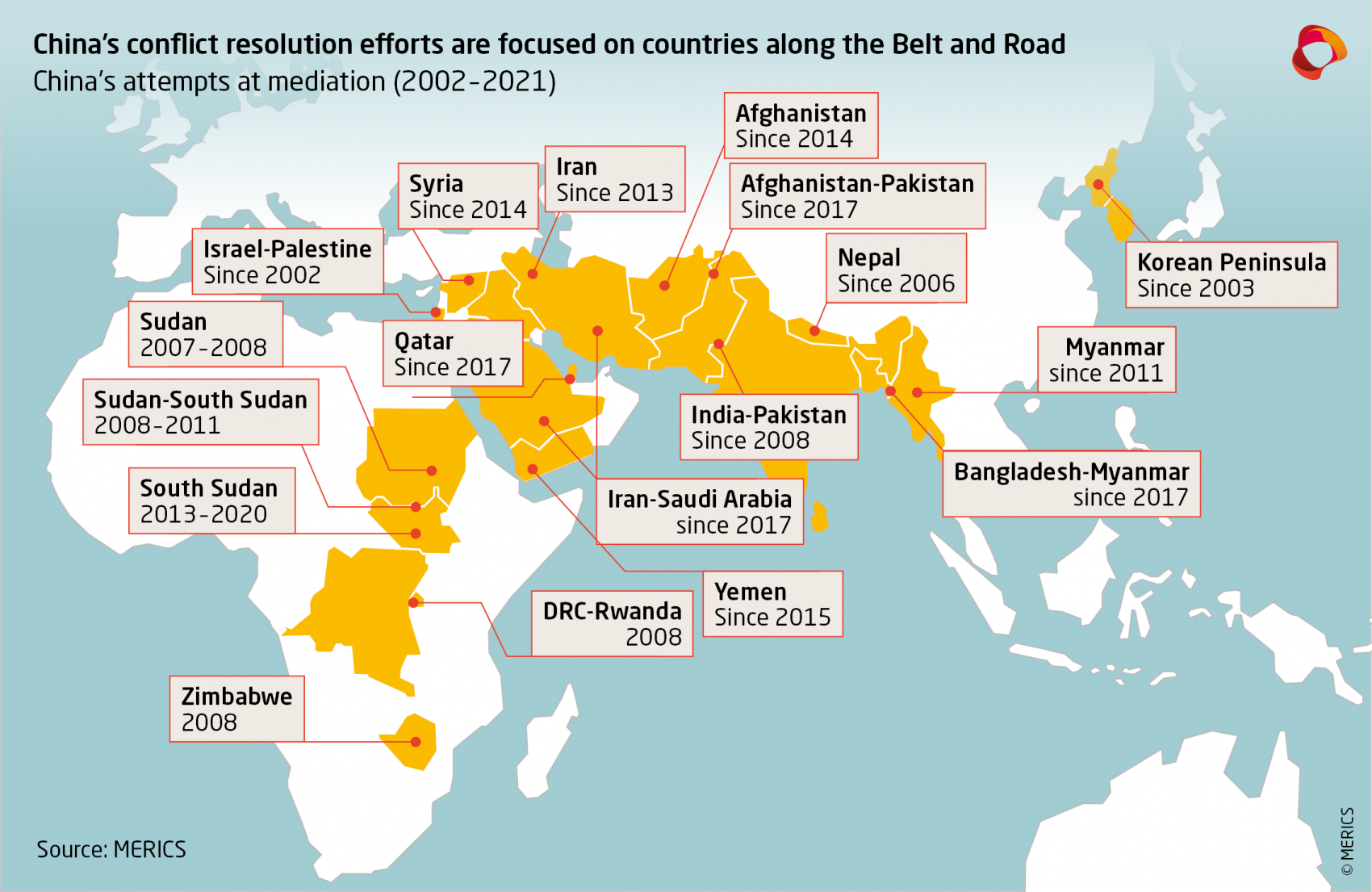 Despite its rhetoric, China’s offers to mediate, providing an alternative to the US-led peace process, have yielded no results so far. The Four-Point Plan has proven to be a non-starter over the last few years and there is little indication that Beijing intends to modify its approach to the conflict.

This is in keeping with China’s approach to mediation in general, which has long focused on high-profile activities and rhetoric, without taking on a more active and involved role. This strategy enables China to present itself as a responsible global actor to a wider global public. Beijing can take credit for trying to solve conflicts, while avoiding any backlash if its efforts are unsuccessful. As an added benefit, it helps drive the Chinese leadership’s narrative that it is a global defender of multilateralism, peace and stability in the face of an increasingly destabilizing United States.

The chances of China stepping in to turn its rhetoric into action and put forward any more concrete (and actionable) proposals to de-escalate tensions or start of peace talks between Israel and Palestine remain slight. Beijing is neither willing nor able to take on the United States’ responsibilities at this stage; it has no wish to be drawn into a complex, politically charged dispute with which it has little or no experience.

You are reading an excerpt of our latest MERICS China Security and Risk Tracker.

If you want to learn more about our membership model for institutions and businesses, please click here.

If you are a MERICS member, you can access the full publication here.