Is the Czech EU Presidency bad news for China?

Certainly not good news. As Prague takes the baton from Paris next week, it will use its six-months Presidency of the Council of the EU to focus on responding to the Russian invasion of Ukraine, reinforcing democratic values, and expanding EU coordination with NATO. While adjusting the EU’s China policy is not going to top the Czech agenda, the afore-mentioned priorities will have a secondary impact on EU-China relations, hindering prospects for stabilization.

Prague may also choose to expand on its bilateral experience and lobby for further expansion of EU-Taiwan relations. In the sensitive period of a run up to the Chinese Communist Party Congress this fall and of increased uneasiness about growing US and EU presence in the Indo-Pacific, Beijing has been increasingly bullish about the status of Taiwan and may try to undermine such efforts.

A few years ago Czech-China relations were flourishing under the patronage of Czech President Miloš Zeman, but Beijing’s unfulfilled economic promises, scandals surrounding the President’s links to China and the opposition’s re-focus on the democratic legacy of Václav Havel (the first president of the Czech Republic) changed the dynamic between the two sides. The new center-right coalition government, formed under Prime Minister Petr Fiala at the end of last year, has been drifting further apart from China while expanding links with Taiwan. As in several other Central and Eastern European (CEE) countries, Prague’s outlook on China was affected by Beijing’s tacit support for Moscow’s invasion of Ukraine.

A mid-April visit to Prague by China’s Special Envoy for CEE and former Ambassador to Czechia, Huo Yuzhen, seems to have achieved little effect in reverting the downward trend in Sino-Czech relations. Less than a month after Huo’s visit, the Czech Parliament’s Foreign Affairs Committee unanimously urged the government to limit its activities in the 16+1 framework, potentially abandoning it altogether. The Minister of Foreign Affairs Jan Lipavský tacitly endorsed the idea of limiting engagement with Beijing by stating that economic promises of the 16+1 framework remain unfulfilled “even after 10 years” and by his actions of personally opening an exhibition of dissident artist Badiucao in Prague.

In parallel, Czechia-Taiwan relations have been expanding. Building on the visits last October of Taiwan’s Foreign Minister Joseph Wu and Taiwanese trade delegations, in April Taipei announced the creation of a USD 200 million Central and Eastern Europe Investment Fund that will focus on projects in Czechia, Lithuania and Slovakia.

Put briefly, it seems unlikely for Beijing to find favorable sentiment from the Czech Presidency.

China does not top the Czech Presidency’s priorities list. Understandably, Russia takes this spot: the Presidency will focus on supporting Kiev, managing the refugee crisis, ensuring the EU’s energy security, strengthening the bloc’s defensive capabilities as well as economic and democratic resilience.

Still, as shown by the last EU-China Summit, Russia-focused priorities can impact EU-China relations. Under the Presidency of a strongly Kiev-sympathetic Prague, the EU will be keenly monitoring the depth of Beijing-Moscow coordination in the coming months. Any tighter coordination may bolster the Presidency’s lobbying for stronger alignment on China.

Similarly, the increased emphasis on democratic values captured in the Presidency’s motto “Europe as a Task: Rethink, Rebuild, Repower” — a reference to a work by Václav Havel under the same title is not in Beijing’s interest. It could be a prompt for expanding links with a democratic Taipei or impact the course of the EU’s debates about the geopolitical outlook, potentially strengthening support for the “democracies vs. autocracies” framing.

Taking on the responsibility of the chair of the Council meetings, Prague will be in position to frame the discussions on relations with China and may seek to prevent a potential return to business-as-usual mentality held among some other member states. Just how unfavorable this turns out to be for Beijing will largely depend on the level of its support for Moscow.

This September, Jorge Toledo Albiñana will replace Nicolas Chapuis as the new EU Ambassador to China, a post which the latter has held since 2018. Toledo is a veteran Spanish diplomat, currently serving as Spain’s Ambassador to Japan. His past postings were not focused on China, which will set him apart from Chapuis, a Sinologist and fluent Mandarin speaker.

However, Toledo brings a breadth of experience gathered through his work in Japan, Senegal and India combined with various EU-focused positions within the Spanish Administration — including assignments linked to Transatlantic relations and workings of the G20.

The new Ambassador may therefore take a more geopolitical view on China drawing from his knowledge of East Asia, the Indo-Pacific, Western Africa and key international frameworks. Toledo’s nationality and position in Madrid circles may also help to facilitate a better channel of communication with the EEAS High Representative Josep Borrell, a fellow Spaniard. 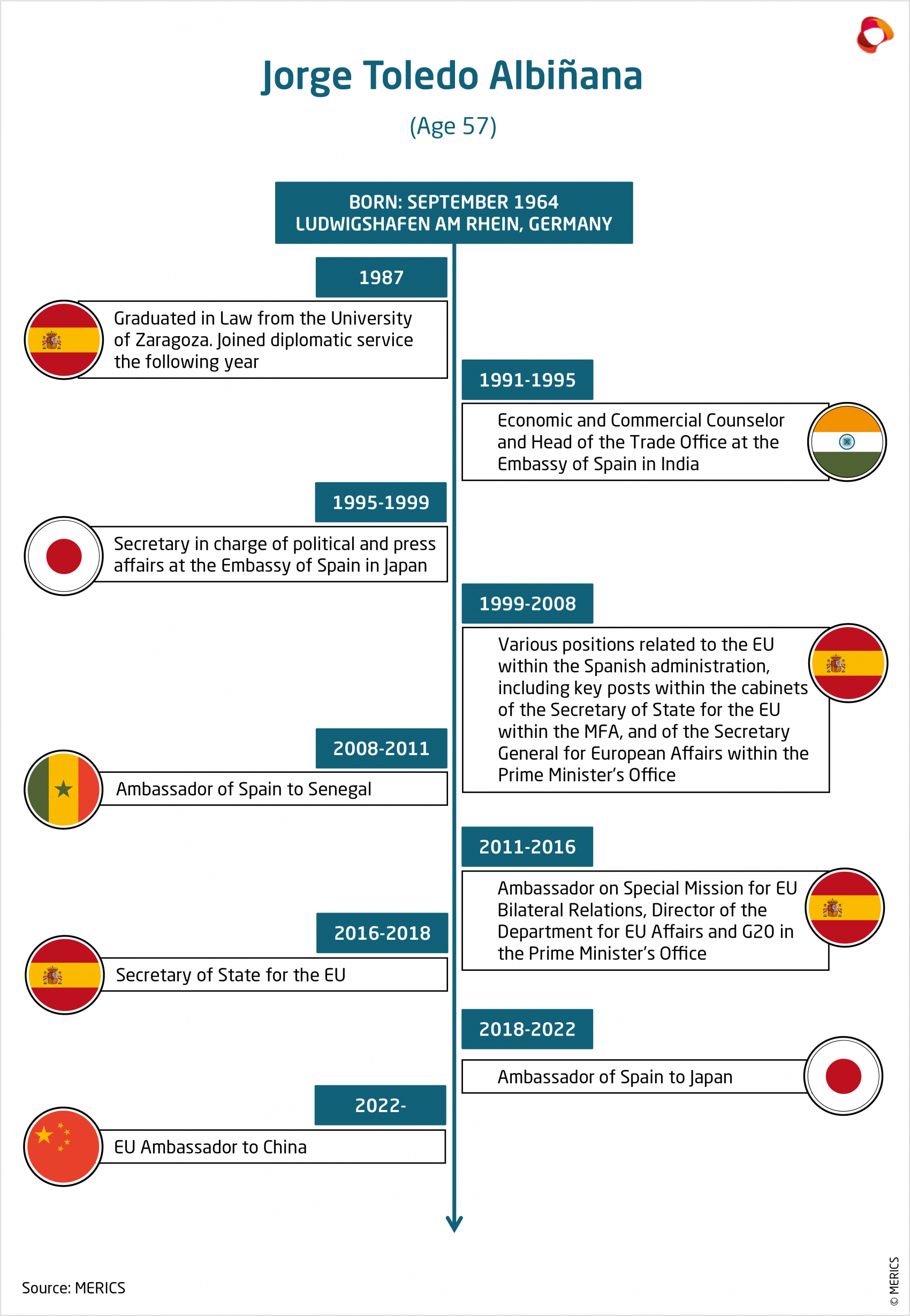 Following the controversial visit to China of UN Human Rights Council (OHCHR) High Commissioner Michelle Bachelet, the most recent session of the Council showed Beijing’s ability to mobilize political support within the UN.

On June 14, a group of 47 countries, spearheaded by the Netherlands, expressed grave concern about human rights abuses in China and urged the High Commissioner to promptly release a report on human rights in Xinjiang. In reaction, a Cuba-led statement supported by 69 states opposed “politicization of human rights and double standards” indicating that “Hong Kong, Xinjiang and Tibet related issues are China's internal affairs.” Wang Lutong, Director General for European Affairs at China’s MFA described the event as “69:47 […] yet another victory” for China in the OHCHR.

Between June 29–30, NATO leaders will gather for a summit in Madrid. While the leaders are expected to focus on the fallout from Russia’s invasion of Ukraine, strategic concerns related to the Indo-Pacific region and China will also be discussed.

Three things to watch out for in the new Strategic Concept will be: the wording used in the context of China will be a signal of the level of political convergence between the EU and the US on China; the framing of the China-Russia relationship may be a further indication of bloc politics making a comeback; the prominence of the Indo-Pacific during the summit  which may suggest harmonizing the US and the EU’s initiatives in the region.

But aside from the ultimately selected wording, transatlantic partners have been converging on China over the course of the last year. The convergence, evolving through several platforms, goes beyond political framing, as shown by the creation of a joint funding mechanism to support secure digital infrastructure and cybersecurity in partner countries. This comes in response to China’s funding via its Digital Silk Road.

Between June 26 and 28, the G7 leaders will meet for a summit at Schloss Elmau under German Presidency. The leaders are expected to show that “democracies are aware of their joint global responsibility”, which may signal further converging their stance on Russia with potential implications for China.

The Council of the EU endorsed the International Procurement Instrument, a policy tool aimed at ensuring reciprocity and access to public procurement bids on third country markets for EU companies. We described IPI’s significance for China in a past briefing.

The European Chamber of Commerce in China released its annual Business Confidence Survey. According to the findings, while two thirds of the EU companies saw an increase in their revenue in 2021, 60 percent noted that doing business “became more difficult year-on-year” with covid-related disruptions being the main cause.

Since the beginning of the pandemic, EU students have been unable to obtain visas to enter China with many forced to pursue degrees online and attend classes at odd hours due to the time difference. While the reason given by authorities is the country’s covid-policy, Beijing allowed students from several China-friendly countries — such as Russia, Pakistan, Nicaragua, Sri Lanka and Solomon Islands — to enter the country for in-person classes.

During her visit to Taipei, Lithuania’s Vice-Minister of Economy and Innovation Jovita Neliupsiene announced that Vilnius plans to open its representative office in Taiwan this September. A major delegation from Lithuanian biotech and laser sectors is also expected to travel to the island around that time.

Sweden became the first EU country to grant asylum status to a Hong Kong activist over their possible prosecution under the National Security Law for engaging in activism outside of the city borders. The beneficiary is Narayan Liu, the founder of “Bauhinias for Freedom”, a Hong-Kong focused pro-democracy activist.

On June 17, Stanley Johnson — father of the UK Prime Minister Boris Johnson, met with Chinese Ambassador Hua Mei in preparations for his upcoming summer trip to China for a Silk Road focused film project. The initiative puts Boris Johnson in an awkward position, particularly as he is regarded within his party as insufficiently critical of Beijing.